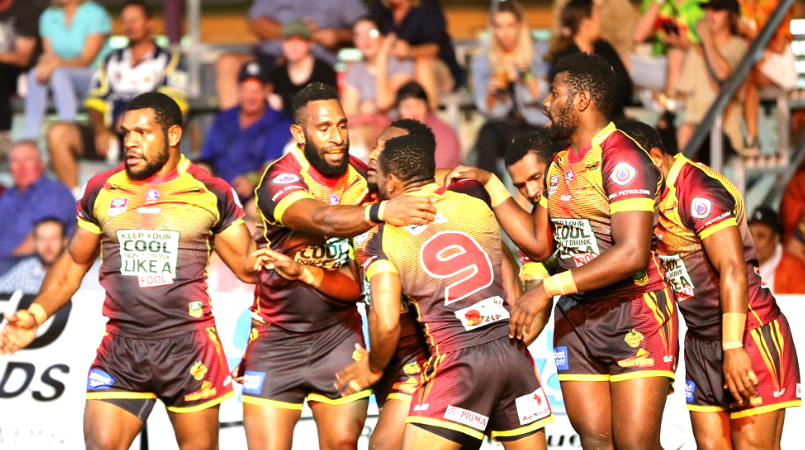 The SP PNG Hunters secured their first win of the 2019 Intrust Super Cup Season with a convincing 28-10 win over the CQ Capras on Saturday.

The Hunters ran in five tries to the Capras’ two to take the win in front of a vocal Hunters crowd that turned up at the McIndoe Park in Rockhampton, Queensland, Australia.

The Hunters opened the scoring through Brendan Gotuno off a Woods Kawage grubber in front of the Capras line to take a 4 – 0 lead in the 10th minute.

The Capras replied six minutes later when five-eighth Maipele Morseu ran past flimsy defence to score to take the lead 6 – 4.

The Hunters swung the momentum around when Junior Rop ran off an inside ball from Ase Boas to score for the Hunters to regain the lead 10-6.

The Hunters scored again when Oti Bland Tony ran through a hole to run 30 metres to score for a 16-4 lead before the break.

The second half was a tussle and it wasn’t until the 60th minute when the Capras fullback Kainoa Gudgeon sprinted 50 metres to reduce the deficit by six points.

The Hunters remain composed and maintained pressure on the Capras. They were rewarded when replacement Hooker Charlie Simon dived over from less than a metre out to extend the Hunters lead to 22 – 10.

In the 75th minute, Simon sent a grubber behind the Capras goal post for Co-Captain, Moses Meninga, who followed through to score closing the match for a 28 – 10 full time score.

The Hunters face Ipswich Jets in Round 7 at home on Saturday.