Cordner's retirement call: 'For once I put my own health first' 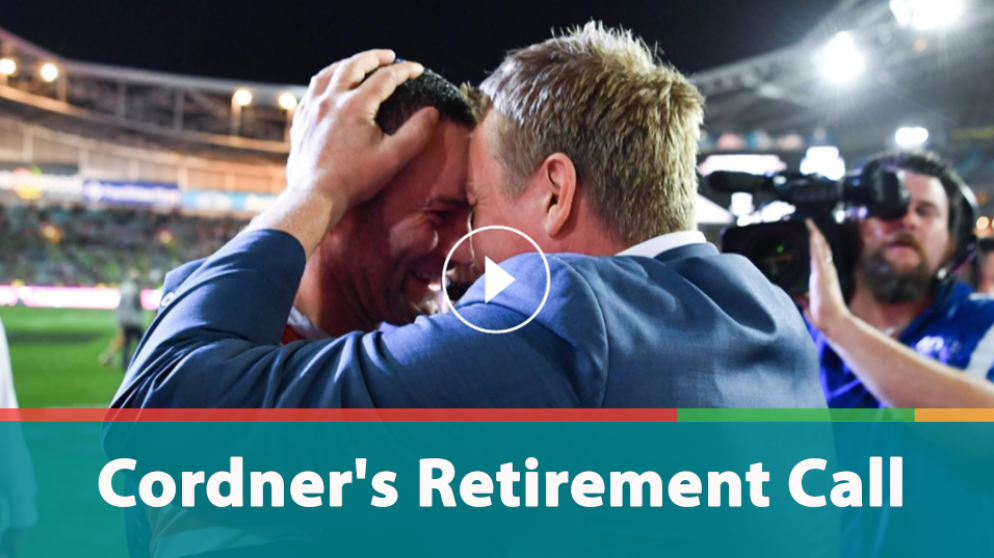 Roosters champion Boyd Cordner didn't think he could live with himself if he suffered another head knock, and so made the toughest decision of all – to call time on his career while he still had more to give.

Cordner held court for 25 minutes on Monday morning after announcing his rugby league retirement, speaking with the passion and honesty that embodied his decade at the game's highest level.

Roughly a dozen times throughout a moving press conference Cordner stopped to choke back tears and compose himself as he confirmed the "toughest decision I've ever made".

Just days after his 29th birthday, the entire Roosters club, including Trent Robinson and his squad, chairman Nick Politis and front-office staff, were joined at the SCG by Brad Fittler, Cooper Cronk, Mitchell Pearce, Todd Carney and Wade Graham to mark his momentous decision.

Up until just a few weeks ago Cordner had been still preparing to return from a six-month lay-off due to repeated concussions.

But having pushed his body through all manner of injuries to lead the Roosters, NSW and Australia, Cordner realised last week that "for once in my life and my career I had to put my own health and happiness first".

"I'm proud that I've come to this decision," Cordner said on Monday.

"The easiest thing for me would've been to say nothing and play on. But I know now that this is the toughest thing that I've had to do.

"Deep down I knew I wasn’t 100 per cent fully recovered. I was at a stage where I was at full training with the guys and I was very close to 100 per cent, but the feeling of going out and [thinking], ‘what does the next head knock look like for me?’ ... I couldn’t get that out of my head.

"If I was 100 per cent I would have been back playing last week or this week, I wouldn’t have had those thoughts.

"I think what I went through at the end of last year had a big impact on me... To be honest, I don’t want to go back there given how far I’ve come.

"If I ever did get another head knock I don’t know if I could have lived with myself ... I've played on with everything.

"It's pretty well documented [about] my body breaking down like a two-door car. I've been able to pick myself up and if I want to go, my body just goes. But I knew this was different because I couldn't get my head and heart to align."

Cordner bows out after 181 games in the red, white and blue and will be long regarded as one of the club's true greats having played a key role in their 2013, '18 and '19 premierships.

He joins co-captain Jake Friend in early retirement after he too succumbed to the effects of serious head knocks.

The exit of the two premiership-winning captains, along with veteran winger Brett Morris, continues a significant changing of the guard for Robinson's side, with that trio taking more than 700 games worth of NRL experience out of the Roosters line-up.

Cordner's retirement comes with two years remaining on his Roosters contract, freeing up an estimated $700,000 in the Bondi club's salary cap in 2022 and 2023 should the NRL approve a medical retirement application.

He said the decision was "entirely my call" with some specialist advice recommending Cordner not play on, but others saying "we can't see why not" based on his recovery from a series of head knocks last year.

Cordner thanked his teammates past and present, Robinson, Politis and a host of Roosters staffers for playing an integral role in his career, as well as his father Chris and his partner Jemma.

He also paid tribute to NSW coach Brad Fittler and Australian counterpart Mal Meninga, having played 16 Origins for the Blues and 20 Kangaroos Tests.

Cordner lifted the Origin shield twice as NSW captain in 2018 and '19, with Robinson describing him as "one of the greatest leaders of men I have ever seen".

"At any level of the game, I’m sure that every player who ever stood alongside Boyd would thank him for being the teammate and leader that he was," Robinson said.

“Perhaps most importantly, Boyd is a great person," V'landys said.

"His friendly and warm personality made him very popular with all he came into contact with. He’s a role model and someone young players aspire to be."