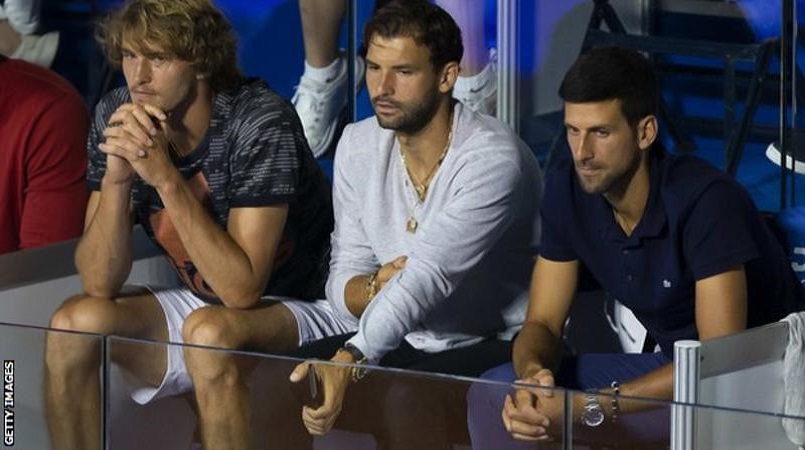 World number 19 Grigor Dimitrov, who played in both of Novak Djokovic's recent Adria Tour events, has tested positive for coronavirus.

The Bulgarian, 29, withdrew from the second tournament in Zadar, Croatia on Saturday with sickness after his opening loss to Borna Coric.

"I am so sorry for any harm I might have caused," he said.

Sunday's final, which would have featured world number one Djokovic, has been cancelled.

Dimitrov, who also played in the first event in Belgrade last week, wrote on Instagram: "I tested positive back in Monaco for Covid-19. I want to make sure anyone who has been in contact with me during these past days gets tested and takes the necessary precautions.

"I am back home now and recovering. Thanks for your support and please stay safe and healthy."

The tournaments were set up by world number one Djokovic to help players get back to match fitness after several weeks without competition because of the coronavirus pandemic. Several top-10 players have been competing including Djokovic, Alexander Zverev and Dominic Thiem.

The first event in Serbia attracted 4,000 fans, and several thousand attended in Zadar.

With both Serbia and Croatia easing lockdown measures before the events, players were not obliged to observe social distancing rules in either country and were seen embracing at the net at the end of their matches

Pictures on the tournament's social media from three days ago show Dimitrov playing basketball with Djokovic, Zverev and Marin Cilic, while he also put his arm around Coric before their match.

Djokovic's coach and event director Goran Ivanisevic told fans courtside the final was off because of Dimitrov's positive test.

Tournament organisers said the final was cancelled "as a precaution and to protect the health of all participants and visitors".

A statement read: "At all times we have strictly followed the epidemiological measures in place with the countries where the Adria Tour was organised.

"None of the people involved in the organisation and who have been in contact with Grigor have any symptoms.

"However, we are in close contact with health authorities in order to insure that all people who were in contact with Grigor will be tested tonight. Since we do not want to risk, we decided to cancel the final match."

There have been no professional tennis events organised by the main men's and women's tours since March because of the coronavirus pandemic.

The US Open will be held without fans from 31 August to 13 September, despite some players voicing concerns about travelling to New York.