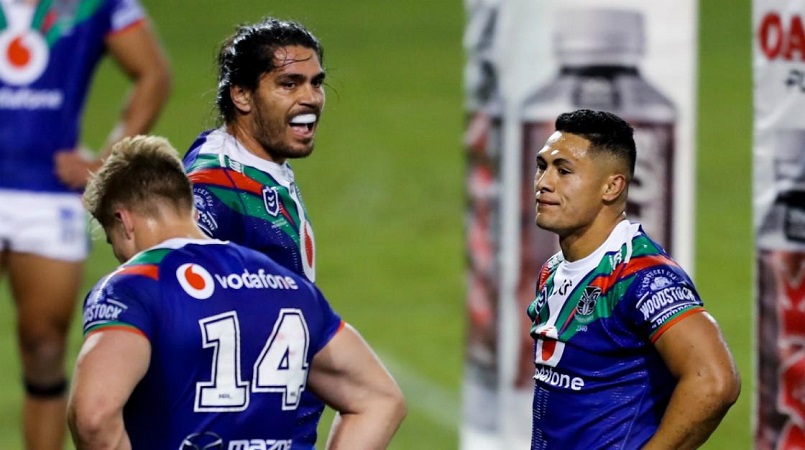 NZ Warriors coach Stephen Kearney feels his side were their own worst enemy as they came crashing back down to earth with a 26-0 defeat against the Penrith Panthers at Campbelltown Stadium.

A week after holding the St George Illawarra Dragons scoreless, the Warriors didn't fire a shot as they failed to score a single point for the second time this season.

Nothing seemed to go the Warriors' way, with all of the Panthers' five tries coming off mistakes or penalties.

On top of that, the Panthers dominated possession and the ruck battle with Kiwis international James Fisher-Harris leading the way with a career-high 239 run metres and 44 tackles.

Kearney felt little mistakes haunted his side, in particular their last-play options, as the Panthers pounced on their errors, while taking advantage of the new rules.

"I just thought we didn't give ourselves a chance and what the new game is teaching us is when you miss the jump or lose momentum it's hard to claw back, says Kearney.

"I thought Penrith played well tonight but we certainly didn't help ourselves."

However Kearney did question the referee Matt Cechhin for not sending any Panthers players to the sin bin for repeated ruck infringements, that 6-2 advantage in set restarts.

"I reckon they had about five of them on the first tackle tonight.

"And when I last read the brief, it said that if they were making multiple six-again infringements, that someone was going to go to the bin. I didn't see that happen."

Kearney also refused to blame his side's relocation to Australia as an excuse for the defeat.

He reiterated that the Warriors will remain in Australia "indefinitely" and even if a trans-Tasman bubble is formed he's unsure if they'll be able to return home to play games.

"I don't anticipate it's going to be hard, there was no doubt some emotion and adrenalin last week but the simple fact tonight was we missed our assignment and made it difficult for ourselves," Kearney said.

"The reality is we missed our jobs tonight and we get another opportunity to work on that and fix it next Friday."

The Warriors, now 1-3 this season, will hope to bounce back next weekend against the North Queensland Cowboys at their new 'home' stadium on the Central Coast.

But the Warriors will once again be light on troops, with Kearney ruling out star wings Ken Maumalo and David Fusitu'a for the match against the Cowboys.