I caught that ball: Milford 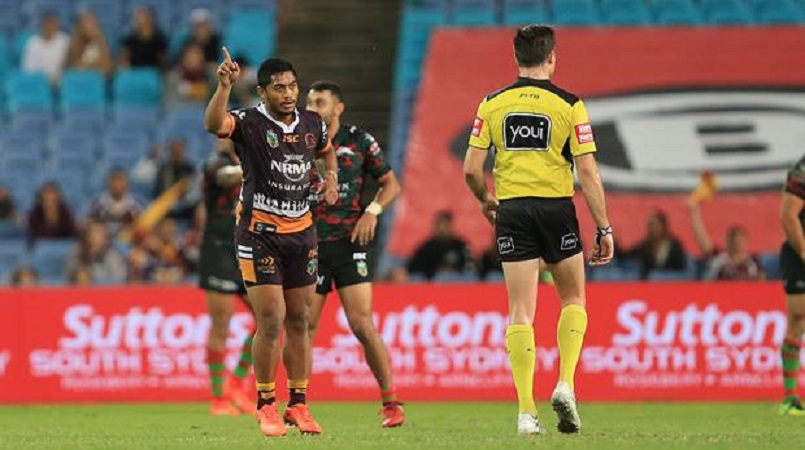 Brisbane Broncos five-eighth Anthony Milford has vehemently denied any suggestions he knocked-on in the lead up to his match-winning field goal against the Rabbitohs on Friday night.

The 22-year-old appeared to bobble a pass on the ground before he stepped off his right foot and coolly slotted the one-pointer with his left boot to give his side a pulsating 25-24 win at ANZ Stadium.

Rabbitohs coach Michael Maguire questioned the 78th-minute incident, but Milford said it was a fair play.

"Controversial? What happened?" Milford quipped with media after the game.

"There was no doubt in my mind that I caught the ball for the field goal. I hit that not as sweet as I could, but the most important thing is that it went over.

"I caught it. If I dropped it then I wouldn't have hit it.

"I don't think it [Maguire's views] worries us too much. The most important thing is that we celebrated the Anzac game to the best that we could. It was another tough game for us – we left it to the dying minutes again – so we're just going to take the two points and run away with it."

The play itself held extra meaning for Milford who had missed a shot moments earlier, while he also let several opportunities slip late in the game in the Round 2 loss to the Cowboys in golden point.

"When that play the ball happened I just thought in my head 'just clear my head' and I just had that clutch moment in my head," he said.

"That one was instinct. I prefer to kick it on my right and I wanted to make amends for my miss earlier.

"I put my hand up – I wanted to step up in that moment – and I was fortunate enough [to nail it]."

Milford also weighed in on the debate surrounding Tautau Moga's game-levelling try in the 69th minute when the Broncos centre scooped up a loose ball to score near the posts.

Milford appeared to have been held while attempting to ground the ball, only for the ball to come free allowing Moga to score.

The on-field ruling was that it was a try, and the Bunker couldn't find sufficient evidence to overturn it, although Milford was adamant that he had in fact grounded the ball in the first place.

"I think they stripped it out and lucky enough 'Tau' played to the whistle and he scored. I think it went up as a try and I don't think they found it conclusive that it wasn't a try. We got the four points and that's all that matters."

The Broncos playmaker wouldn't bite on rumours about his future at the club, telling media that any possible contract extension was up to his manager.

"The contract stuff is left to my manager and the Broncos. They're sorting it out and they're still talking so I'll just leave it to them."