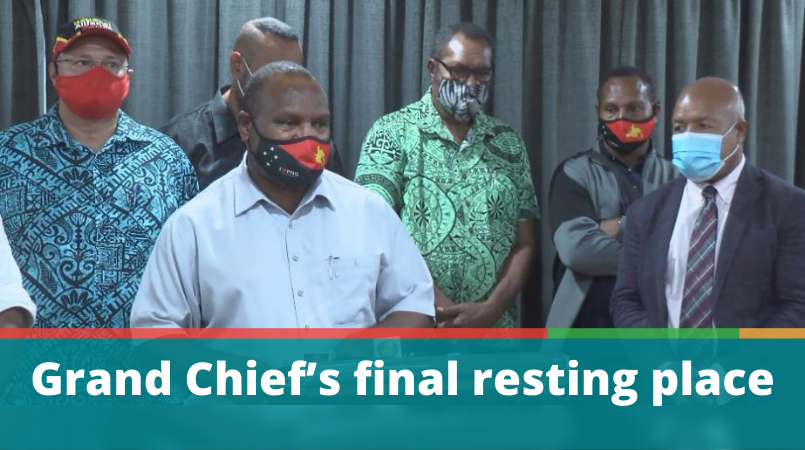 Prime Minister James Marape announced the decision for the final resting place for ‘Father of the Nation’, Grand Chief, Sir Michael Thomas Somare to be at the new Somare Museum site at the Kreer Heights Hill, Wewak, East Sepik province.

In a press conference today, Marape said the decision was not easy to make but after a lot of diligent considerations of all factors between the family, the NEC and the Funeral Working Committee, a final resolution was made.

Prime Minister Marape told the media that it was the wishes of the people of this country and also according to a political decision, for all Prime Ministers of the country to be buried on Independence Hill.

However it will not be so for the Father of the Nation, Grand Chief Sir Michael Thomas Somare.

“The view is that he is the father of the nation and he is to be laid to rest here in the independence hill, but in this morning’s discussion something emerged; his word, his will, must also be honoured even in passing.” PM Marape said.

Although Grand Chief Sir Michael was aware of the tradition to bury any PM on Independence hill, he informed his immediate family while he was still alive that he would like to be laid to rest in his home town Wewak.

“He’ll be rested at the Kreer Heights and so this morning’s meeting has arrived with the decision in consultation with the family that we will do the monument and the national remembrance sort of memorial here in Port Moresby at the independence hill and a specific designated park will be established along the boulevard and a national museum precinct, where Somare Peace and Unity park will be.” Marape said.

He added that there will be a Somare Peace and Unity park and a monument established and a bronze statue to be erected also in Port Moresby, at the Somare Foundation Roundabout where visitors coming into the country are welcomed by the big bronze statue of the Grand Chief.

Prime Minister James Marape described the final burial place of the late Sir Michael Somare, Marape to be a place where the nation can search for when they want to see the story of Somare and the story of the country. It will be through a museum to be built in his memory.

”That was the decision that we made today and I apologize sincerely to our citizens for those who wish that he is buried here in our nation’s capital.

“We will not let that hope down, we will build a monument befitting of the grand chief but the family and the people of East Sepik have desired through and culminated in the wish that he signed on as a will that he be buried at Kreer Heights and that is the decision that we’ve collectively taken to honour the father of our country’s dying wish.

“And so I beg for understanding from the country. It is not a light decision we arrive at, we know there’s a consequence to this decision, but as I said, Somare is once in a generation, once in a nation and national history.” Marape said.