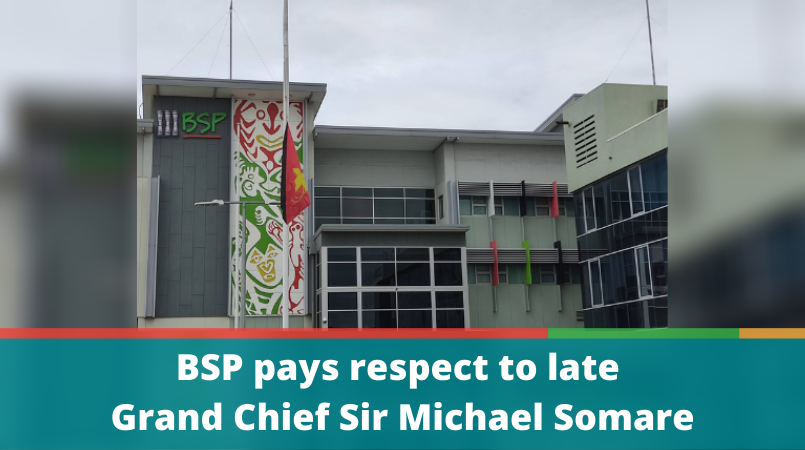 Bank South Pacific (BSP) Branches all across the nation lowered the PNG Flag to half-mast on Friday 26th February 2021 in respect to the passing of the country’s founding father and first Prime Minister, the late Grand Chief Sir Michael Thomas Somare.

In a statement BSP says it joins the rest of PNG as it mourns the loss of the country’s founding father and first Prime Minister.

“It is with sadness that we hear of the passing of our Founding Father of the nation, the Late Grand Chief, Sir Michael Somare in the early hours of Friday 26th February 2021, at the age of 84, after succumbing to cancer,” said BSP Group CEO Robin Fleming.

The BSP Group CEO along with BSP Board of Directors and Executives while attending the First 2021 BSP Board of Directors meet in Lae, Morobe Province, said; “BSP is about people and we join the rest of PNG and the Business Community in showing respect at the loss of PNG’s first Prime Minister and four-time Prime Minister, the late Grand Chief Sir Michael Thomas Somare.”

“We share in the grieving of the late Grand Chief together with everyone throughout the country. We extend our sincere condolence to the immediate members of the Somare family. May his soul rest in eternal Peace,” Mr Fleming added.