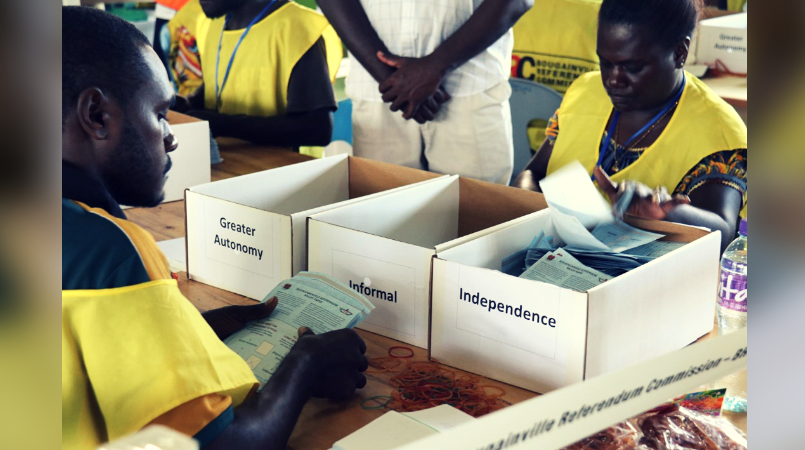 The 40-day petition period for the Bougainville Referendum process has closed without any complaint lodged.

“Our sole purpose was to deliver, according to the law, a democratic and credible answer to the question of ‘independence or greater autonomy’ for Bougainville as voted for by Bougainvilleans,” Tsianai said.

“We are glad that this electoral process is now complete, and that it has proven to be a credible one for all interested parties, as well as international and domestic observers.

“The absence of petitions validates the Commission’s own view that the referendum was conducted to international standards, and was a free and fair process providing a result which the two governments of Bougainville and Papua New Guinea can trust.

“We now wish the two governments all the best as they commence the next steps of the Referendum process as defined by the Peace Agreement: a period of consultation and then a final ratification by the National Parliament of Papua New Guinea of the political future of Bougainville.”

The 40-day petition period is a normal part of any democratic electoral process and is provided for in the Organic Law on Peace Building in Bougainville, Autonomous Bougainville Government and Bougainville Referendum, 2002. A petition can be lodged by a voter, or by the BRC itself.

The Commission meets today in Port Moresby to begin the process of winding up the Commission over the next three months, ensuring all outstanding payments to be finalised and all assets and finances accounted for and dispersed to funding agencies and/or the two governments.

A comprehensive report is currently being drafted by the Commission, including an analysis of the lessons learnt for future elections in Papua New Guinea and Bougainville, as well as full disclosure of finances and expenditure.

“The Commission will continue to operate according to its charter, including being professional and transparent,” said Tsianai.

“We were provided with funds from the two governments and the international community, and we continue to be accountable to those bodies during this wind up process.”

After the three months, the Commission will revert back to a transitional Commission co-chaired by the two Electoral Commissioners and the Chief Secretaries of the governments of Papua New Guinea and Bougainville.

On 13 December 2019, the Commission delivered the following results to the Governor-General:

“The Commission again thanks every Bougainvillean who enrolled and cast their vote. That alone has given credibility to the electoral process and honours the intent of the Bougainville Peace Agreement.”