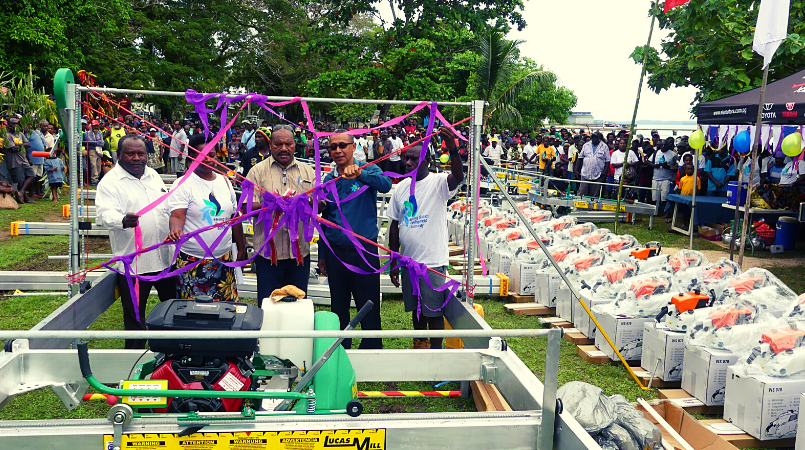 Economically, the equipment can allow people to build houses, shops and community facilities at lower cost. It is also a sign of wanting to do more value-added processing in PNG rather than simply exporting round logs.

He made the presentation of the equipment to community leaders of 19 wards of Lavongai LLG, 18 wards of Tikana LLG and 6 wards of Murat LLG, following requests made by community leaders at community development forums organised in the villages and project implementation meetings held in Kavieng.

“With the onset of the COVID-19 pandemic, the Marape-Steven government, through its K5.7 billion economic stimulus package, seeks to build resilient communities as the foundation upon which the nation can withstand the impacts of the coronavirus,” Treasurer Ling-Stuckey said.

“The portable sawmills and chainsaws were requested by the respective community leaders during several and extensive consultations I have had with my people.

“These equipment are seen by the communities as enablers that will empower families to build a better future for themselves.

“Urban based New Irelanders, living in cities such as Port Moresby and even Cairns in Australia, who continue to be skeptical, simply have lost touch with village life.

“For example, villagers in remote Umbukul village in New Hanover, Nonopai in the Tikana LLG area and Tasitel in even more remote Murat LLG area, do not have the privilege to drive to a nearby Hardware Haus or a Bunnings store and simply buy hardware materials off the shelf and drive away.

“My people have to journey to select locations carting heavy equipment and then cut down large trees and mill the specific timbers themselves. Hard work over several weeks, but now made possible to achieve their dream because of the sawmills and chainsaws provided.”

Ling-Stuckey said the donations reflect the Marape Government’s Take Back PNG agenda, which switches the focus of government away from large-scale, one-off projects in the formal economy, which often bring little benefit to the bulk of the population.

“The Marape road to development success is to encourage sustainable home-grown enterprise, from individuals through micro and small business, and community-based endeavours. The starting point is places like Lavongai, Tikana and Mussau, where people work hard and aspire to a better life for themselves and their children.

“Why shouldn’t we direct more of our government finances, and more of our time and energy, to helping them in every way possible? They deserve every toea that I have directed to them, and I know they will make very good and productive use of it.”

Ling-Stuckey said this new way of thinking was also reflected in the Government’s K5.7 billion COVID-19 Economic Stimulus Package. The largest item in the K600 million of direct spending is for agriculture, fisheries and forestry, at K111 million.

“All of this will be directed to the grassroots level through provincial governments and District Development Authorities.”