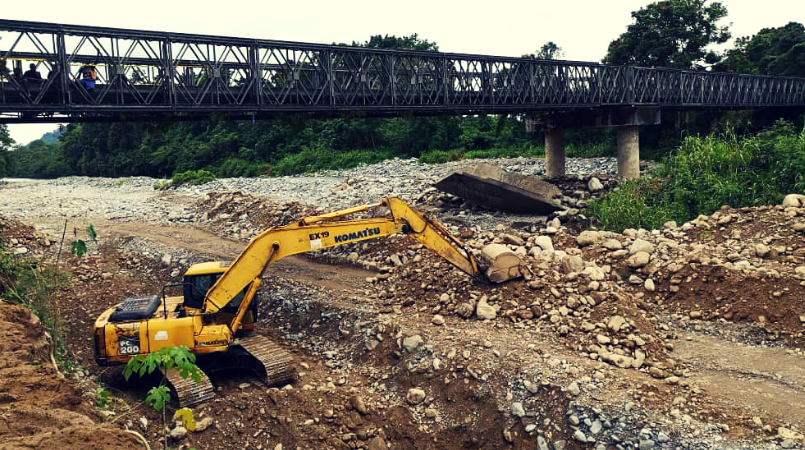 Police Minister and Member for Gazelle, Jelta Wong, says connecting communities to essential education, health care facilities and economic opportunity is one of the cornerstones of social development.

He said this in relation to the start of emergency maintenance works on the Warapukpuk Bridge situated in the Lassul-Baining LLG in his electorate, which is considered a potential food bowl for East New Britain.

Minister Wong said by providing reliable access to critical services, the bridge will transform not only the communities but also the people’s potential to thrive.

He said with a secure bridge in place, students are able to attend school, workers can safely get to work and residents are not isolated from the nearest health centre and market.

“A funding of K800,000 has been allocated for protection works at the vital bridge that will take eight weeks to complete.”

Meantime, road works consisting of a maintenance project and emergency work is currently underway in parts of the district.

The maintenance project supervised by Works Department is focused on the road between the Tokarangon junction and Kerevat and is being undertaken by contractor Kokopo Plant Hire.

According to the district engineer, Ivan James, the maintenance work includes drainage work and road side clearing.

The emergency work is focused on the wash out near JK Magic area and the Wara Pukpuk Bridge situated in the Inland Baining LLG.

“The district has co-funded the work on the wash out with K100,000 while Works Department would meet the remaining cost of the total of K436,000,” said Wong.

“The work is being undertaken by contractor GK Investment and supervised by the Kerevat district works.

“The contractor GK Investment is also now on site at Wara Pukpuk bridge and have begun river training and major protection work.

“This bridge is one of the biggest creating access for the people of inland Baining and Lassul-Baining, therefore it is important to protect the bridge.”

The National Government has earmarked K800,000 for this work and the Gazelle district has allocated K500,000 for the bridge work.