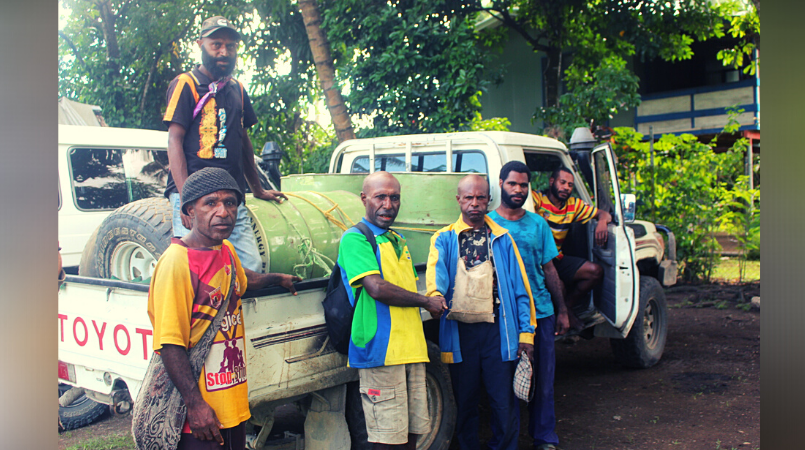 The Morobe Provincial Government presented three fuel drums each for roadworks in various parts of Morobe on Wednesday 13th May.

The fuel drums will beef up the operations of works machinery that are to progress the roadworks of Middle Watut in Mumeng LLG of Bulolo District and Leron- Wantoat LLG of Markham District respectively.

“It is the priority of MPG to ensure construction works for roads in the province progress.”

EO for Mumeng LLG, Sam Tani, on behalf of his LLG President Kekeng Amos (Chairman Mining-MPA), whilst thanking MPG and Governor Saonu for the timely intervention, said roadworks for Middle Watut have been stalled with the lack of support, such as fuel.

“For almost six to seven weeks because of landslide the road project has been delayed, causing a lot of inconvenience for the simple people of the area,” Tani said.

“Sambio to Wawas road there are six ward council areas that use this road with an estimated population of five to six thousand. Most of the project completed did not reach Wawas and so this Government is keen for the road to reach Wawas.”

Tani said it will be a relief now once works are completed for the people of Wawas to be dropped off right at their doorsteps.

“We are reopening the Gwasak Primary School soon and as soon as the road is reopened, Governor Saonu and Mumeng LLP President will be travelling to announce the reopening of the school. A teacher is already on the ground to ensure smooth transition of reopening,” Tani highlighted.

Governor Saonu said MPG stands ready to support crucial infrastructural development to ensure basic services reach the rural people and that the continuity of economic activities flourish to sustain the livelihood of the people of Morobe.

For Leron-Wantoat LLG, Mupe Basae, when receiving the drums of fuel, said the support will go as far as Wantoat Station and that the people of Kabwum, who use the area as a shortcut into Lae, will have access to the upgraded road network.

“The support of fuel drums by MPG will not only assist the people of Markham, but extends to Kabwum and Nawaeb District who utilize this portion of the road and it is timely for the simple majority,” Basae added.