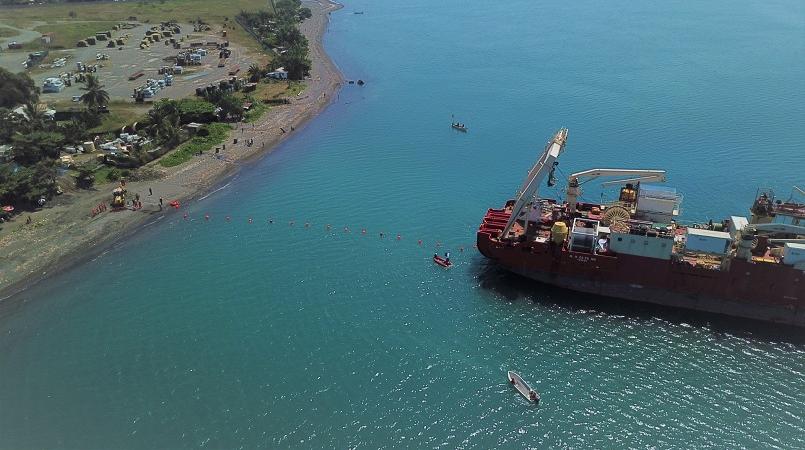 Work on the National Transmission Network (NTN) is about 60 percent complete.

In an update on the status of the National Transmission Network that is being constructed in various parts of the country, PNG DataCo Limited Managing Director, Paul Komboi, said work is progressing well and PNG DataCo is confident to deliver the project by 2020.

A modern domestic and international transmission network connecting all provincial capitals and multiple international connections to diverse international locations is being built by PNG DataCo and its partners.

The NTN uses fibre optic (subsea and terrestrial) as primary route and satellite as secondary route. It is a strategic national infrastructure intended to be shared by all. The NTN consolidates the existing infrastructure and the new infrastructure being currently built.

The existing networks are; LNG Fibre, terrestrial OPGW/ADSS cables and international submarine cables and gateways as well as the satellite infrastructure at the Gerehu Earth Station.

The multiple submarine cable breaks in the Kumul Submarine Cable Network (KSCN) System 2 around the Lae Bismark sea waters, which were trigged by the 7.2 magnitude earthquake in Bulolo on May 7th, 2019, are now scheduled for repair commencing 24th July.

“The cable ship for repair is en route to PNG now and we are expecting the repair to complete in Mid-August 2019,” Komboi said in a statement.

“After completion of the repair, this cable ship will then proceed to install new submarine cables to Kerema, Gulf Province and Daru, Western Province. This will complete transmission connectivity within the southern region of PNG up to Lae and Madang. Which only leaves the Islands region and Wewak and Vanimo in the Momase region to be completed by first quarter 2020.”

The national transmission network comprises of;

The Managing Director said the arrival of the Alcatel cable-laying vessel “Ile De Brehat” at the beginning of July, saw the first phase of CS2 project begin. The laying, which began in July, will see cable-laying work complete on target for the end of 2019.

PNG DataCo, who is responsible for the Government’s representative on the project, will work with Vocus, Alcatel, DFAT and Solomon Island Cable Company (SICC) to ensure cable-laying from Port Moresby to Sydney and Honiara operates smoothly.

Komboi is confident that when the KSCN and CS2 Submarine Cable Projects are completed in the first quarter of 2020, this will ensure that PNG will have international and domestic transmission connectivity to distribute high capacity and quality broadband capacity to all provincial capitals, empowering Telcos and ISPs as well as the corporate enterprise and government to extend their suite of ICT services and products to the other populated areas to service the people of PNG.

“The challenge for PNG now is to ensure this broadband capacity is distributed across the country for all to use at a cheaper rate and is reliable,” Komboi said.

“With the mass growth of traffic and demand through sharing of the NTN infrastructure, economics of scale can be achieved hencem resulting in lower pricing for our people and the business communities.”

PNG DataCo is confident the projects are delivered to international standard quality, on budget and on time so that PNG enjoys the best broadband services at cheaper prices.