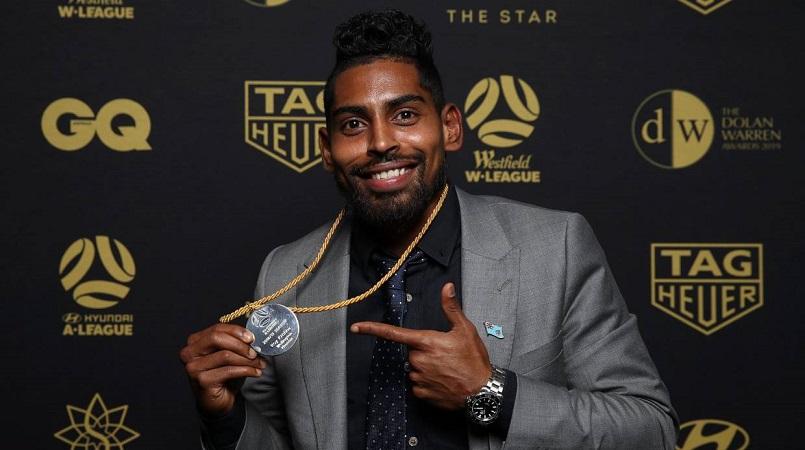 Roy Krishna is officially the best player in the A-League.

The Wellington Phoenix striker has capped off a career-best season by winning the Johnny Warren Medal, the honour for the competition's best player.

He was the third Phoenix player to take out the prestigious award after Shane Smeltz in 2008-09 and Nathan Burns in 2014-15.

Krishna also took out the league's Golden Boot with 18 goals this season, breaking Jeremy Brockie's club record for most goals in a season in the process.

The 31-year-old Fijian international is off-contract and attracting interest from around the league for a big-money marquee deal.

He was already said to have rejected an offer from expansion club Western United, while Sydney FC and Western Sydney Wanderers are also chasing his signature. The Phoenix were understood to have offered him a lucrative new deal.

The Johnny Warren Medal is awarded by a judging panel of former professional players, referees, technical experts and members of the media for the A-League regular season. Panel members from each of the four groups were appointed to vote on a 3-2-1 basis on every match.

Castro and Honda only played 20 and 18 regular season matches respectively this season due to injury, while Isaias played every minute of his side's 27 matches. Krishna and Kilkenny played 26.

Kurto is expected to depart the Phoenix for Western United in the off-season.

It wasn't all good news on Monday night for the Phoenix, with Sarpreet Singh beaten to the under-23 player of the year award by Perth's Chris Ikonomidis.

Brisbane Roar's Frenchman Eric Bautheac won goal of the year for his overhead, bicycle kick against the Central Coast Mariners in round 20.

Sydney FC won the fair play award after accruing the least number of yellow and red card points. They take on the Glory in Perth on Sunday night in the grand final.

In other Phoenix news, Spanish midfielder Mandi announced his departure from the club on his Instagram account on Monday afternoon.

"Thanks for everything New Zealand, always in my heart," he wrote.

He played 25 games for the club in his only season in the A-League.