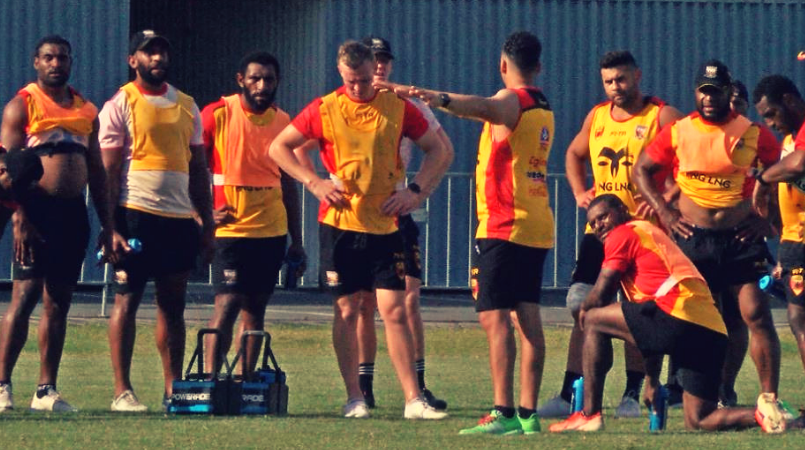 James Segeyaro and Lachlan Lam have been dropped from the PNG LNG Kumuls team to the Rugby League World Cup 9’s in Sydney, Australia, for disciplinary and family reasons.

This has paved way for UK-based Wartovo Puara Jnr and PNG Hunters captain, Moses Meninga, into the 15-man squad.

The Kumuls and the Oil Search PNG Orchids teams had their first run on Tuesday at the National Football Stadium.

Under the watchful eyes of head coach Michael Marum and his assistant, Digicel Cup Champions Lae Snax Tigers mentor, Stanley Tepend, the team had its first run as part of its bonding process.

Majority of the squad have played together in previous international fixtures and are gelling well however, for a number of players this would be first time playing 9’s rugby league on the international stage.

“The selectors have done a good job in picking a team that’s fast,” stated Tepend.

“A few halves in there so you need the creativity to play the shortened game, only 9-minute halves so I think they’ve done well in that area.

“The boys are really looking forward to it and I think we’ll do most of our solid trainings here and go down to Sydney on Monday to just touch up on the final parts of the tournament.”

After the team’s first run, the media was allowed to get some comments from a number of players on how they feel about their selection.

Garry Lo said after his four SP Hunters games, he returned to Mt Hagen for a one-month break.

“I got a bit tired in the first session but I know I’ll pick up and it’s going to be ok.”

Redcliffe Dolphins’ winger, Jedidiah Simbiken, said: “It was very emotional because I never thought I’d get that opportunity because start of this year, (I had) a surgery and then in July I had another surgery again on my knee.

“I’m very grateful and happy to come and join the boys in camp.”

The two teams will depart for Sydney on Monday 14th Oct before the tournament kicks off on Friday 18th October at Bankwest stadium in Sydney.