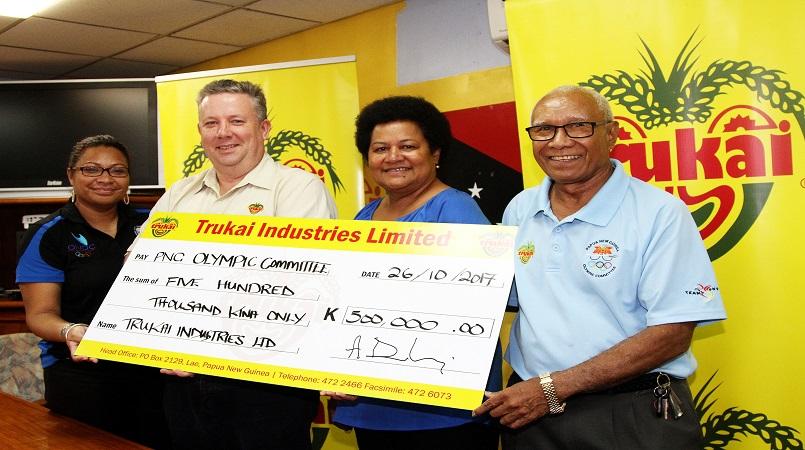 President of the Papua New Guinea Olympic Committee, Sir John Dawanincura, has praised Trukai Industries for continuing to be a great supporter of sport in the country.

He said this after Trukai Industries General Manager-Sales and Marketing, Andrew Daubney, presented a cheque for K500,000 from the Trukai Fun Run to the PNGOC yesterday.

The cheque was to support Team PNG to the 2017 Pacific Mini Games in Vanuatu in December.

Dawanincura said Trukai has been supporting a number of sporting teams and associations which includes the PNG Weightlifting Federation and the PNGOC.

He thanked Trukai and acknowledged their support of PNGOC through the Trukai Fun Run for the last 18 years.

“Trukai is a great supporter of sports in PNG and we are extremely fortunate to have them as a major partner of the PNG Olympic Committee.

“Their support has enabled Team PNG athletes to travel and excel in their respective sports for Papua New Guinea and we are very grateful to them,” he said.

He also acknowledged the corporate sector for their involvement in the Trukai Fun Run, especially for the auctions in Lae and Port Moresby.

“Providing support in sports is something we pride ourselves in, and it’s great to be involved with the PNG Olympic Committee.

“They do a great job in developing sport by ensuring that PNG is represented at the world stage, and that the athletes always perform to their very best, it is an honour to be part of a great team.”

Team PNG Chef de Mission to the Pacific Mini Games, Emma Waiwai also thanked Trukai Industries for their support and added that the focus of Team PNG this year is to make an impact in Vanuatu.

With almost a month left before leaving for Vanuatu’s capital, Port Vila, Waiwai reports that the team is preparing well with their lists finalized.

“With the support we have from Trukai and the other sponsors, we are sending a team that we know is going to deliver the medals for us.”

Team PNG will leave for Vanuatu on November 30. The 2017 Pacific Mini Games will run from December 4-Decmber 15.