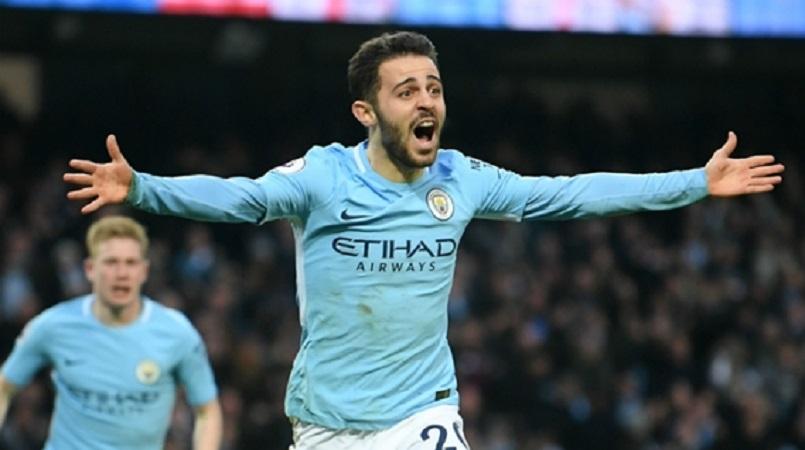 In a thoroughly commanding performance from a City team closing in on their first league triumph since 2013-14, Bernardo Silva's strike enabled them to open up an 18-point lead at the summit, though Manchester United can close the gap to 16 by winning at Crystal Palace on Monday.

Antonio Conte dropped Alvaro Morata to the bench as he opted against fielding a recognised striker and false nine Eden Hazard was starved of service as they failed to register a shot on target in the match, the imperious City completely overrunning them.

Chelsea made it to the break without conceding, but an error from Andreas Christensen was seized upon by Sergio Aguero - whose wait for his 200th City goal continues - and David Silva crossed for Bernardo Silva to open the scoring 33 seconds after half-time.

It was enough to inflict a third successive Premier League away loss on the Blues for the first time since March 2013, damaging their Champions League hopes by leaving them five points adrift of fourth-placed Tottenham.

For City, who rested captain Vincent Kompany, it capped a phenomenal eight days in which they recorded back-to-back 3-0 victories over Arsenal, the first coming in the EFL Cup final at Wembley to give Pep Guardiola his first piece of silverware in English football.

That trophy was paraded in front of the fans prior to kick-off and City looked set to produce a similarly dominant performance as they controlled possession and pressed Chelsea high from the off.

An important block by Antonio Rudiger stopped Leroy Sane guiding David Silva's cross home, before Aguero was unable to get a shot away after a loose pass in the box from Cesc Fabregas, selected in place of the ill N'Golo Kante, gifted the hosts the ball in a dangerous area.

Chelsea could barely get out of their own half and a piercing Sane run into the area was eventually halted, though the ball ran on to Bernardo Silva, who curled a sweet left-footed effort onto the roof of the net in the 20th minute.

Sane produced a magnificent touch to bring down Kevin De Bruyne's delivery at the back post, but his thumping shot across goal was blocked on the line by Cesar Azpilicueta and Thibaut Courtois dived on the loose ball.

Chelsea managed to keep City out for the remainder of the first half but their clean sheet was gone within a minute of the restart. Christensen's failure to clear a long pass from Ilkay Gundogan enabled David Silva to cross for Bernardo Silva to stab past Courtois at the back post.

2 - Bernardo Silva has scored in back-to-back league appearances for the first time since May 2017 at Monaco. Shine.

Victor Moses sliced a rare opportunity wildly off target after Chelsea's best move of the match in the 54th minute, but Courtois had to be alert to bat away a driven attempt from David Silva moments later.

Conte introduced Olivier Giroud in place of Willian in the 78th minute, but they did not threaten until Marcos Alonso volleyed wide in stoppage time as City provided another example of why they are the Premier League's leading side.