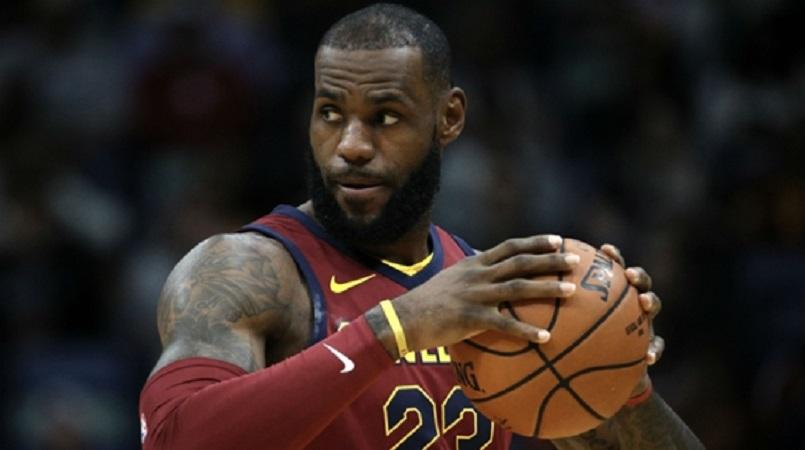 No Kevin Love, Tristan Thompson, Derrick Rose or Isaiah Thomas? No problem for LeBron James as he led the Cleveland Cavaliers to a 105-98 win over the Philadelphia 76ers on Saturday.

Philadelphia were also without Joel Embiid and T.J. McConnell, but with Ben Simmons, Robert Covington, Dario Saric and J.J. Redick still in the fold, they were going to be a tough out for the Cavs.

Thanks to James' third triple-double of the season, Cleveland were able to get back on the winning track. The 32-year-old had 30 points, 13 assists and 13 rebounds while scoring or assisting on each of the Cavaliers' final 22 points.

"This is a big win for us," James told reporters after the game, via Fox Sports Ohio. "Nobody's going to feel sorry for you, so for us to show up, have our All-Star power forward out, to have so many guys out, everyone just gave what they had and we had a lot of resolve and once again came away with a win."

Simmons had 14 points, 10 assists and six rebounds in the loss for Philadelphia.

The Rockets trailed the Portland Trail Blazers in the second half, but thanks to a fantastic performance by James Harden, Houston came back to win 124-117. Harden had 48 points on 16-of-29 shooting with eight rebounds and three assists. Damian Lillard had 35 points and went nine for 16 from three-point range. The nine three-pointers made is the most in the NBA this season.

Ersan Ilyasova truly shined for the Atlanta Hawks in a 117-110 win over the Orlando Magic. He was a perfect nine for nine from the floor, including five for five from three-point range, with 26 points and four assists. Magic center Nikola Vucevic had 31 points, 13 rebounds and 10 assists in a losing effort.

Bucks forward Giannis Antetokounmpo showed off why he was the early MVP favourite once again with 37 points on 14-of-22 shooting with 13 rebounds and seven assists in Milwaukee's 117-100 win over the Jazz.

Clippers guard Lou Williams had 35 points with eight assists in a 113-112 win over the Wizards. Williams also hit the game-winning three-pointer with 1.2 seconds remaining to lead Los Angeles.

Heat guard Dion Waiters went one for 10 from the floor with two points and one assist in the Heat's 101-89 win over the Nets.

Spurs guard Dejounte Murray showed it all with a rebound and behind-the-back dribble before driving coast-to-coast and finishing with a contested lay-in during a 104-101 win over the Suns.

Three of the most unique big men in the game will face off in New Orleans as Anthony Davis and DeMarcus Cousins of the Pelicans will take on Embiid and the 76ers. Embiid has had trouble in the past against Davis and the Pelicans as he averaged just 12.5 points per game against New Orleans last season, but he was on a minutes limit then. He is coming off a day off Saturday, so he should be fresh to match up with the two Pelicans big men.