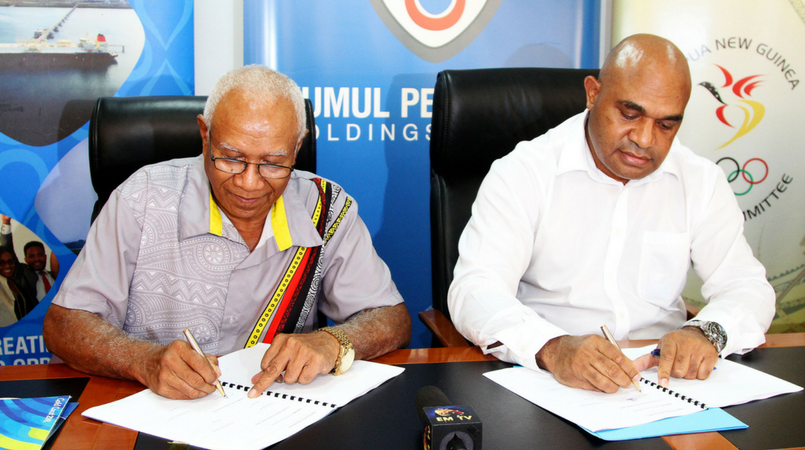 The Papua New Guinea Olympic Committee, in its capacity as the PNG Commonwealth Games Association, has thanked Kumul Petroleum Holdings Limited for their support of Team PNG through their platinum sponsorship of K1 million.

KPHL came on board to support Team PNG prior to the Pacific Mini-Games in Vanuatu last year with K500,000.

An additional K500,000 was also committed to Team PNG to assist with getting the team to the 2018 Gold Coast Commonwealth Games.

President of the PNGCGA, Sir John Dawanincura, was grateful to KPHL’s managing director, Wapu Sonk, and his board for recognising the importance of supporting PNG’s elite athletes to the XXI Commonwealth Games.

“Despite these Commonwealth Games being considerably close to our shores as compared to previous Games, the burden on the PNGCGA to send our team and provide our athletes with the opportunity to inspire others through sport is still significant,” Sir John said.

“Having the type of support which Kumul Petroleum Holdings has provided contributes to making our nation’s best athletes’ dreams a reality.”

Sonk said: “As the nation’s oil and gas company, Kumul Petroluem Holdings Limited is committed to creating wealth and opportunities for Papua New Guinea now and into the future.

“We believe a key part of our nation’s wealth is its people and the Commonwealth Games provides an opportunity for our people to showcase to the world our sporting talent.”

Team PNG will be competing in 10 sports at the Gold Coast Commonwealth Games and will be hoping the efforts of its athletes will also go some way in bringing some positivity to the people of PNG.