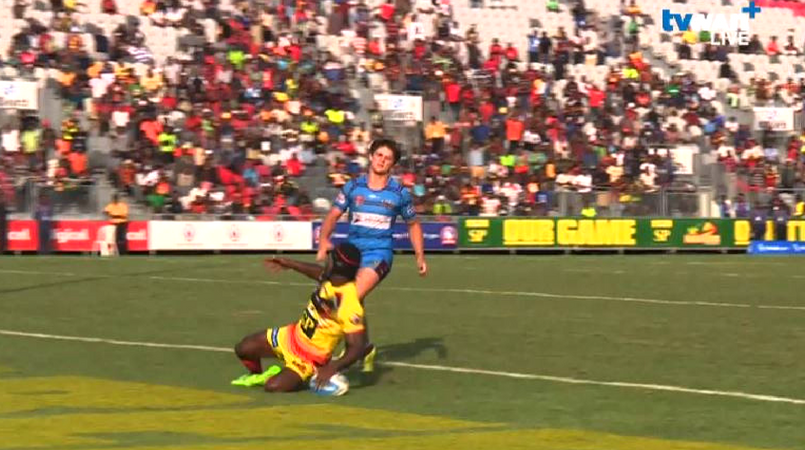 The SP PNG Hunters were on fire this afternoon at the Oil Search National Football Stadium in Port Moresby, defeating the Central Queensland Capras 18-10.

Less than 2 minutes into the game and the CQ Capras shocked the Hunters with an early try.

Centre Connor Broadhurst passed the ball to Junior Kirisome, who wasted no time in flying over the line.

An unsuccessful conversion by Broadhurst left the score at 4-nil.

11 minutes later, a dummy from Wartovo Puara Jnr created an opportunity for Rhadley Brawa, who leveled the playing field with 4-4.

The Hunters then took a 6-4 lead after a successful conversion by captain Ase Boas.

10 minutes after the second try of the Intrust Super Cup round 11 and both sides were still looking for a firm footing.

It was Hunters’ number 17, Edene Gebbie, who broke the tension with a blistering 20-metre run.

Gebbie, who had just returned from injury, scored a 4-pointer for the PNG team.

An unsuccessful conversion by Boas left the score at 10-4.

The Capras tried time and again to cross the Hunters’ try line but the Hunters’ defence was too strong for them.

A return from second half saw another great pass from Broadhurst, allowing a cocky Maipele Morseau to close the gap with a try.

A successful conversion by Broadhurst left the score at 10-10, with 20 minutes left on the clock.

The Hunters refused to easily give in.

Their aggressive play paid off with Junior Rau registering another 4 points, making the crowd go wild.

The score was now 14-10 as the kick from the Hunters captain went off mark again.

With only 3 minutes left on the clock, Watson Boas picked up the ball from a Blake Goodman kick and made a 90-metre dash, scoring Hunters’ final try to seal their win. An unsuccessful conversion left the score at 18-10.

The SP Hunters are now on 9th place while the CQ Capras occupy the 13th rung out of a total of 14 teams.

(Watson Boas over the Capras’ line after his 90m dash)