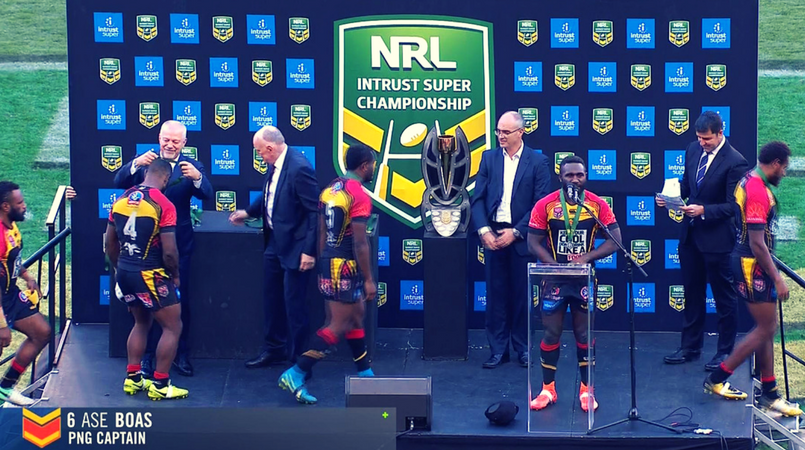 Just like any normal person, the SP PNG Hunters experienced stage fright when playing in the enormous ANZ Stadium that packed over 10,000 people last night.

The Penrith Panthers proved too good for PNG Hunters, posting a dominant 42-18 win in their Intrust Super Championship game in Sydney on Sunday.

The win was set up by the Panthers in the first half, with the Hunters putting in a performance they would rather forget.

It took the SP PNG Hunters 38 minutes to score their first try through centre Adex Wera, who crossed over in the corner for the first of 3 tries for the Hunters.

Hunters’ right centre Bland Abavu, who went into this game hungry to put a try to his name, did so with a try in the corner.

Captain Ase Boas was the other try scorer, going on to convert his own try, bringing the score to 42 points to 12 in favour of Penrith Panthers.

Boas also kicked 2 from 3 attempts to bring the final score of 42 points to 18 in the 2017 Intrust Super State Championship.

Penrith Panthers are this year’s Intrust Super state champions, but not without a last minute effort from the Hunters.

While the loss was a disappointing way to end 2017 for the Hunters side, it was still a remarkable season from the club who earned not only the Intrust Super Cup premiership, but the minor premiers’ shield as well.