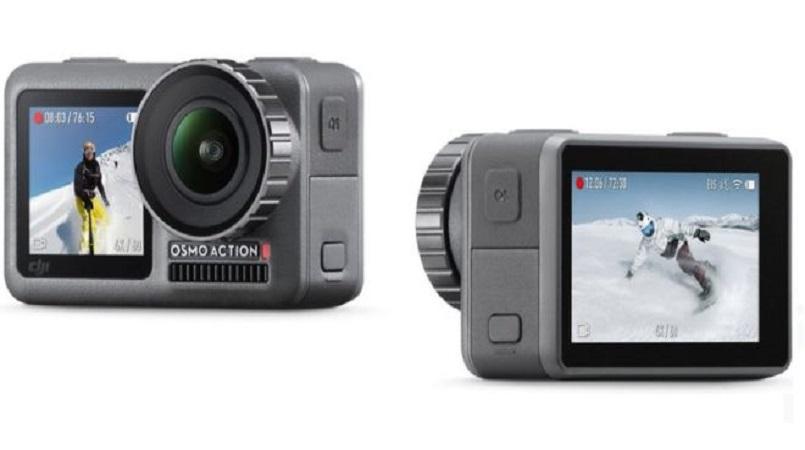 DJI has launched its first action camera posing a challenge to the market leader GoPro.

The Chinese company already dominates the consumer market for drones.

The Osmo Action uses image-stabilisation software to smooth out its video, rather than using the electronic motors found in the Osmo Pocket and other handheld gimbals.

This mirrors the approach of GoPro's Hero 7 Black. But DJI's model has the advantage of a colour front-screen.

The 1.4in display should help frame selfie photos and videos, while its rear 2.25in touchscreen is also slightly larger than that of the GoPro.

Otherwise the devices are closely matched, both offering:

the ability to live-stream footage via a smartphone app

up to 60 frames per second 4K resolution video

Camera reviewer Kaiman Wong is one of the first people to have carried out a side-by-side comparison of the competing products.

"With stabilisation, the DJI seemed a lot smoother across all five axes of movement - the footage seemed to glide along, you almost don't need a gimbal now," he told the BBC.

"And the front screen is pretty good. It doesn't show the full width of the shot, but it's good to know when you are in frame. For vloggers, myself included, it's a very useful feature to have."

He added that so far he had found few downsides to the newer device.

"There is a slight lag in the DJI's display when using the stabilisation, but you can live with it and it may not be an issue [after a software update]."

Other reviewers have noted that the Osmo Action lacks GPS location-tracking and has more basic facilities to share images to social media.