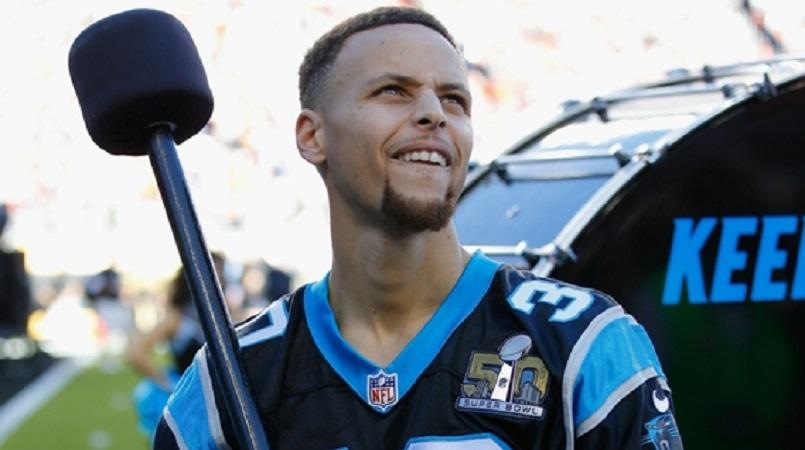 Golden State Warriors superstar and Web.com Tour temp Steph Curry battled early nerves and waywardness off the tee before salvaging a respectable first round at the Ellie Mae Classic

Curry, a two-handicap playing on a sponsor's exemption, said earlier in the week he had two goals: to make the cut and "just have fun."

It appeared he was accomplishing the latter at TPC Stonebrae in California, evident by his increasingly loose nature as the round unfolded on the way to a four-over 74 on Thursday.

But making the cut may be another matter. He was three over five holes into his opening round, only one stroke out of last in the field, before rallying to play the last four holes of his front nine in one under and make the turn at two over.

Drop the ball, shoot the ball.

Before a larger than usual Web.com crowd, many clad in Warriors apparel, Curry started on the 10th tee.

He pulled his opening tee shot left, where it came to rest in the cup-holder of a golf cart. He scrambled for a bogey and a couple of pars later was laughing and joking with playing partners Stephen Jaeger and Sam Ryder.

After back-to-back bogeys took him to plus-three, he finally hit a green in regulation on his sixth hole, flipping a wedge to six feet on the par-five 15th and rolling in the putt for birdie to get back to two-over a third of the way through his round.

After sinking the putt, he looked skyward, arms spread, as if in thanks and then shoulder-bumped his caddie.

Curry showed some resilience as he got comfortable, following a bogey at the second with a birdie on the following hole, then picking up his final birdie of the round at the sixth after posting a double bogey at the par-four fifth.

A bogey on the last was not the ideal way to end his day, but Curry was already looking ahead to Friday's second round.

"I want to play better tomorrow," he told reporters. "Now that I got the jitters out, hopefully that'll happen."