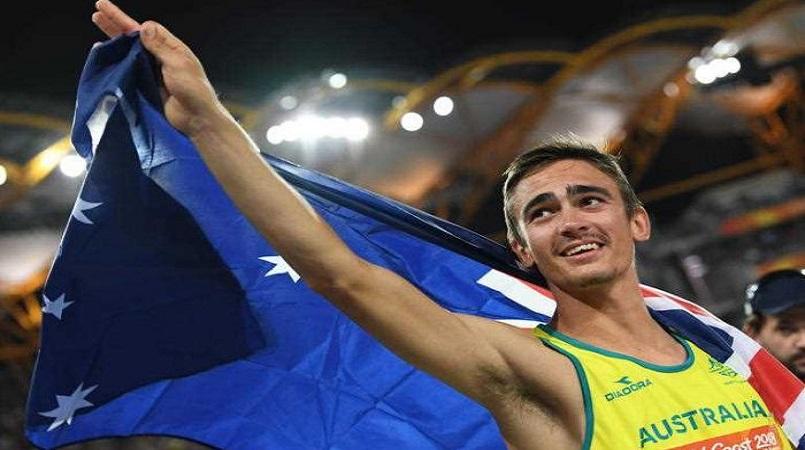 For as long as he's been hovering in the national sporting consciousness, Brandon Starc has been more famous for being the brother of Mitchell, or a Game of Thrones character, than a high jumper.

While Mitchell was dismantling Test batting lineups around the world, and his namesake was warging into wolves and giants beyond the Wall, Brandon Starc was plugging away in track and field, claiming an eighth place here (Glasgow 2014), or a 15th place there (Rio 2016 Olympics) in international high jump.

But now, after an immaculate showing in front of a riveted home crowd, Starc claimed gold with a personal best jump of 2.32 metres — his first medal, let alone a gold, in a senior athletics meet.

Glory on home soil firmly establishes Starc as his own star on high jumping merits alone, not as a Test cricketer's sibling or a pop culture reference.

"One hundred per cent, yes!" Starc said when asked about blazing his own trail.

"I'm not putting anything on Mitchell, he embodies that, he's incredible. But to put my name out there now, it's a good feeling."

Almost as if to emphasise the point, Brandon wasn't even sure if Mitchell had attended the meet at Carrara Stadium.

"I don't know. He had a couple of scans the other day and I think he was trying to get here, but I'm not sure," he said, laughing.

"I got my whole family [here]. My girlfriend Laura, I go everywhere with her.

"She's gone to Rio, she's gone to Beijing [world championships] to watch me. I love her. She's good.

"Mum and dad were here as well, the whole family really. I don't know where Mitchell was."

As far as career moments were concerned, Commonwealth Games gold was going straight to the summit for Starc.

Having made 2.30m in the men's final on Wednesday night, Starc was staring down a possible 2.32-metre jump.

Though he said he was unaware at the time, it was an attempt at a personal best (his previous being 2.31 metres).

Only later would everyone find out it was the winning jump. But looking to scale a height he had never reached, while roared on by the Carrara crowd, everything fell perfectly in to place for the Sydneysider.

"To be honest when I was waiting for that 2.32, it didn't even go through my head that it was a PB height, it was just another height that I had to clear to get that gold," he said.

"I wasn't even in gold position.

"I knew I had to really give it that first-attempt effort, and you know I was feeling pretty good the whole time, the body's really good, my heel was a little bit sore but you have to put that at the back of your head, and just give it your all, and I did.

"I can't take anything away from the crowd. They've given me so much today. The whole stadium was behind me. I can't really explain it, it's just so good.

"My 2.32 — the runup was pretty average, but I just put myself in a good position, went up and got over it. I think I went over pretty clean, too.

"That's pretty much the game plan, keep it simple and you get it done."

Starc's effort on the Gold Coast is the second highest height in the discipline ever reached by an Australian, behind only national great Tim Forsyth.

Forsyth thrilled supporters back in 1997 at the Melbourne Track Classic with a 2.36m jump which hasn't come close to being eclipsed.

Starc shared joint second spot on the Australian all time list at 2.31m, but now has second place all to himself, and is eyeing off the record.

"That's kind of slipped my head a little bit. I was equal second for three years now, so outright second, that's pretty good. 2.36 is next," he said.

"Hopefully I'll keep going. [I'm only] 24. I think I've still got plenty of years left in me. But right now I'm just going to soak it all up and enjoy it."