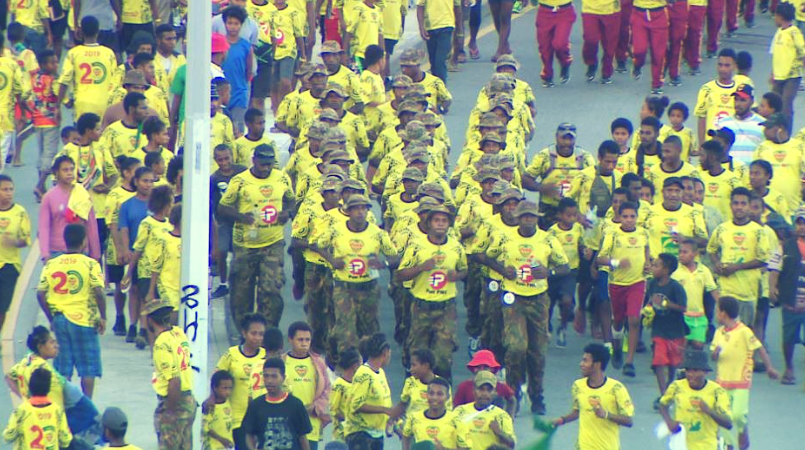 The 2019 Trukai Fun Run has ended on a high, with a huge turnout at seven centres around the country.

In Port Moresby, as anticipated, thousands turned up for the family-oriented event at Ela Beach with no major mishap reported.

Residents arrived at the Paga Ring Road as early as 4am for the 6.30am start.

A sea of yellow snaked its way from the road adjacent to the APEC House all the way down to the end of Ela Beach Road as well as up Musgrave St.

The disciplined forces of PNG Defence Force, Police and Correctional Services made sure their presence was felt as they maintained control from start to finish.

An elated PNG Olympic Committee secretary general, Auvita Rapilla, said today was a much better event with a great outcome, considering Ela Beach is a perfect location compared to the past years where the fun run was held at the Sir John Guise Stadium.

“Great support from the Defence Force, the police, the CS, St John’s – the organising committee has done a fantastic job,” she said.

“This event is primarily to raise funds for Team PNG to a four-year cycle of events. And this year is to the Pacific Games in Apia, which is starting on the 7th of July.

“We’re getting ready to take the team across and it is great that we have fantastic support from the public, the community, the corporate organisations that have purchased shirts for the schools and for their organisations, it not only helps Team PNG but it helps the schools as well.”

This year’s Port Moresby event was well-coordinated, safe and enjoyable; a far cry from the 2018 event where members of the media, St John workers and the public were attacked by thugs.

Meantime, volunteers in Port Moresby as well as Lae, Kokopo, Ramu, Alotau, Madang and Goroka have been commended for their amazing efforts in ensuring the smooth run of their respective events.