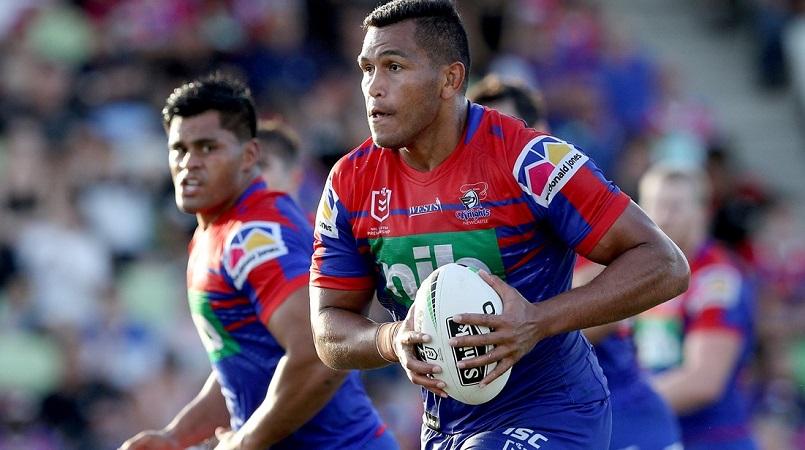 Knights prop Daniel Saifiti was a one-man wrecking ball as the Knights dismantled a woeful Brisbane 27-6 at Central Coast Stadium on Thursday night.

Saifiti tore through some insipid first contact from the Broncos pack at every opportunity, helping himself to 226 metres and a try in two power-packed spells while for Brisbane, Payne Haas played a lone hand with Tevita Pangai jr producing a deeply forgettable return from a long suspension.

Some lovely touches from Mitch Pearce and Kalyn Ponga and yet another excellent game from Kurt Mann provided the points but it was Saifiti, his brother Jacob and David Klemmer that provided the platform, dominating the Broncos pack throughout.

Coach Adam O'Brien welcomed the hit-back after the round five loss to the Storm.

"I thought that was really important that we came down here five days later and rectified that," O'Brien said.

"Good teams do after a loss, they find a way to win the next week so that was an important learning curve for us. It's a stepping stone to where we want to get to.

"It wasn't polished in terms of attack, we just had to find a way to get the job done."

The Knights seemed to make 70 or 80 metres with every yardage set while Brisbane's lacklustre showing was punctuated by a sin bin and report for Pat Carrigan due to a late hit to the back of Pearce.

Pangai announced his return with a huge early shot on David Klemmer, but his first game since being suspended in round one will feature little else he will look forward to seeing at the team's video review session, including three errors and a game-high six missed tackles.

Broncos coach Anthony Seibold said his team's effort was good but again the execution and lack of cohesion let the team down.

"There was plenty of effort there at different times," Seibold said.

"I won't call it dumb but we're not playing smart."

Seibold wouldn't criticise individuals but pressed about an almost completely anonymous game from big-money half Anthony Milford, who ran six times for 29 metres, he said: "There's no doubt we need more from our elite players.

"When we're conceding so many penalties and six again particularly out of yardage, it's hard for them to come into game."

The Knights opened the scoring after Mitch Pearce forced an early drop out and followed that with a lovely short ball for Kurt Mann to score in the 11th minute.

Brisbane looked to have levelled soon after and somewhat against the run of play but Jamayne Isaako gave some assistance to Corey Oates as he looked to ground the ball, shoving tackler Gehamat Shibasaki away and costing his team a four-pointer.

Isaako then found himself in the sin bin, perhaps harshly, for a second-effort on Kalyn Ponga having just dragged the Knights fullback down short of the line. The Knights cashed in almost immediately with a Mann grubber handing Hymel Hunt his first try of the season.

Brisbane came out of the sin-bin with a try apiece thanks to some individual brilliance from young winger Xavier Coates. With the Knights again pressing the Brisbane line, Coates rushed up to shut down a left-side play by intercepting an Andrew McCullough pass and sprinted 96 metres to score.

An opportunistic Pearce field goal right on half time made it 13-6 at the break.

A very soft Daniel Saifiti try extended the lead early in the second half, with Issac Luke on club debut, Pangai and Joe Ofahengaue dropping off a regulation tackle.

Pat Carrigan found himself on report and in the sin bin for a late, cheap shot to the back of Mitchell Pearce with 20 minutes remaining, which also allowed the Knights to take a free two points to further stretch their lead.

"It doesn't get any cheaper than that," Johns said.

Pearce strolled over for a well-earned four-pointer of his own shortly before full-time to put an exclamation mark on a big Newcastle win....