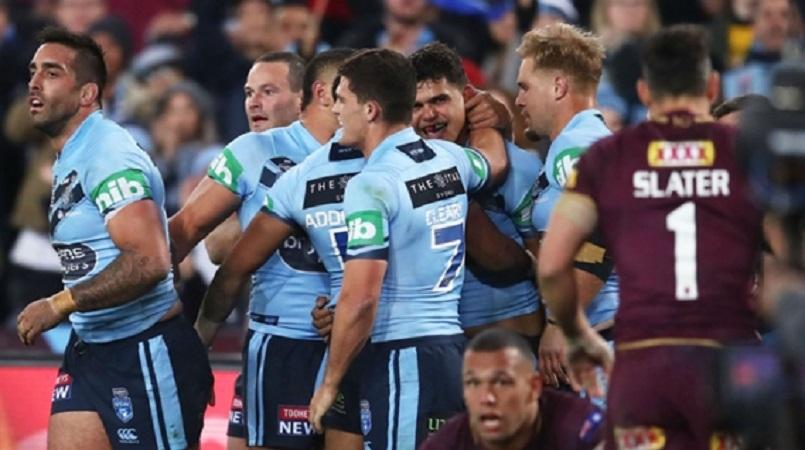 New South Wales Blues celebrated a rare State of Origin series triumph over Queensland Maroons after an 18-14 win from behind in game two at home in Sydney.

Blues coach Brad Fittler, new to the role this year, guided New South Wales to victory in his first match in Melbourne and they wrapped up just their second series win in 13 years with a game to spare on Sunday.

Unlike in 2017, NSW were able to build on their opening victory, even with veteran Billy Slater back from injury for the Maroons.

Slater was instrumental in building a Queensland lead, but James Maloney was once more in inspired form to ensure the Melbourne Storm full-back will be playing solely for pride in his final Origin match before heading into representative retirement.

Maloney helped to forge a route back into the match and his trusty boot proved the difference for the Blues as they clung on for a momentous success.

Queensland looked better for Slater's involvement and their early momentum was almost rewarded with a try, Dane Gagai denied as he slid out of play when squeezing the ball over in the corner.

It did not take long for the visitors to get the opener, though, with Slater and Greg Inglis drawing defenders to free Valentine Holmes to streak clear on the left.

NSW simply had no answer for Slater and he soon created a similar situation on the opposite flank that allowed Gagai to dive across the line.

But the first half turned when the Blues scored against the run of play, Josh Addo-Carr taking a pass from Maloney and dancing past Gagai.

A penalty try followed when Ben Hunt blatantly bodychecked Boyd Cordner as he stormed after a grubber-kick into the in-goal area, giving NSW a half-time lead that had seemed improbable for long stretches.

It looked as though the hosts might then retreat, but another score followed nine minutes after the restart when Latrell Mitchell powered through Will Chambers.

Mitchell - too big, too strong @NSWRL extend their lead, 18-10 after 52 minutes.#Origin #NRL pic.twitter.com/E5iTJZMIgi

Subsequently put under pressure, however, the Blues attempts to keep their rivals at bay did not last long and it was Chambers on the right who profited to bring the visitors back into contention.

James Roberts was adjudged to have tugged back Gavin Cooper and was sent to the sin bin in the 69th minute, but Queensland's late pursuit of a fourth try was fruitless in a decisive second defeat.