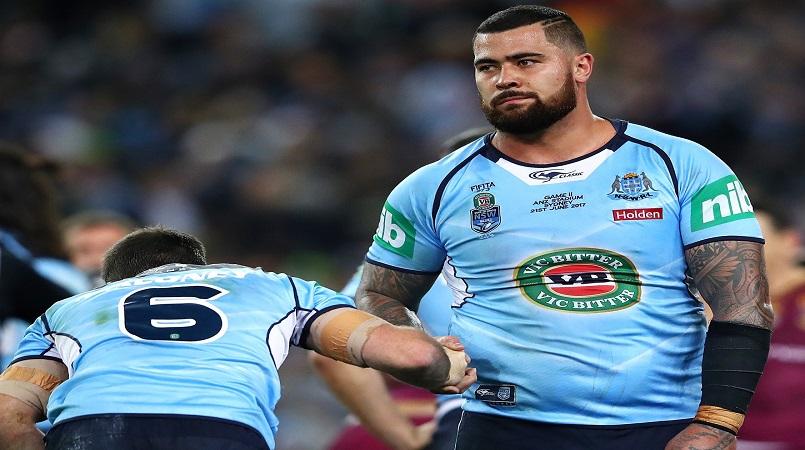 NSW prop Andrew Fifita is set to line up for the Blues on Wednesday night with heavily-pregnant wife Nikki close to giving birth to their third child in the coming days.

The Australian international was hoping for an Origin II victory to ease the pressure at the end of the series but the Maroons' win in Game Two has ensured there's still plenty of stress on the 28-year-old heading into the clash.

While Fifita has been guarded from the media in preparation for the all-important decider, NRL.com spoke to the Sharks prop about the situation off the paddock prior to Origin II.

"When the doctor is saying Nik is 39 weeks it's a bit worrying but we've been prepared for it and knew it would be close," Fifita told NRL.com.

"I'm willing to miss my baby's birth to wrap up the series and she's been very supportive of that and wants a win just as much as we all do.

"She understands and knows it's my dream and wants me to be happy."

Coincidentally, Fifita's NSW roommate Nathan Peats welcomed his second child into the world last Thursday with both players bonding over the anxious wait.

"At the end of the day I'll be thinking about it and jumping on Face Time as much as I can before it," Fifita said.

"We don't know the sex of the baby so I think that's the best part of the surprise."

Front-row teammate Aaron Woods expected Fifita to rise to the occasion after being contained by the Maroons in Game Two.

Fifita was restricted to less than 100 run metres on the slippery surface of ANZ Stadium and will benefit from a drier track in Brisbane.

"They attacked him pretty hard when we had the ball and got a lot of numbers to him," Woods said.

"He was disappointed he didn't get enough ball in Game Two but is raring to go and wants a big game."

It was both Woods and skipper Boyd Cordner who made the most yardage for the Blues in their two-point defeat, however there will be a focus on getting Fifita more involved in the decider.

"He's a big frame and the way we carried ourselves sometimes probably didn't help the way Fifita plays," Woods said.

"[For me] I can give him more tip-ons or [the coach] can let him play a bit wider. We'll have to see what the game plan is."

The Blues travel to Brisbane on Tuesday afternoon following their final training run.