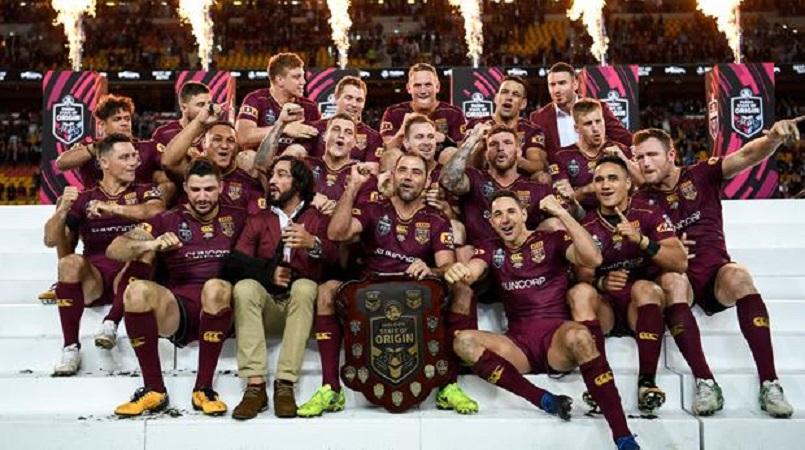 It was a night to farewell a legend but the Maroons have uncovered Johnathan Thurston's heir apparent after Cameron Munster's stunning State of Origin debut in Queensland's 22-6 Game Three win at Suncorp Stadium.

Played in front of a ground record of 52,540 predominantly Queensland fans Munster was involved heavily from the outset, Storm teammates Cameron Smith and Cooper Cronk showing great faith to bring their new five-eighth into the play at every opportunity.

Queensland had never handed a half an Origin debut in a Game Three decider in 35 years of three-match series but any concerns the Rockhampton product would shy away from the occasion were almost immediately dispelled.

It was Munster's pass that created the space for Michael Morgan to put Valentine Holmes across for the first of his three tries in the 15th minute but it was midway through the second half that the 22-year-old endeared himself to an entire state.

With the match hanging in the balance and the Blues finally building into the contest after trailing 12-0 at half-time it was Munster who broke the game apart in the 60th minute with a brilliant piece of play to set up Holmes for his third try of the night.

Spotting Blues half Mitchell Pearce shooting out of the line, Munster stepped hard off his left to slice between Pearce and Boyd Cordner, evaded the clutches of Josh Dugan and sent the pass wide to Holmes who miraculously reeled in one-handed a pass that was high and behind him, bouncing out of two tackles to score in the corner and a 16-6 lead.

Some wonderful interplay between Cronk and Slater put the Maroons on the attack again shortly thereafter and it was Munster who dropped the ball onto his left foot and earned his side an invaluable repeat set. From the ensuing set he sent prop Jarrod Wallace over for the first try of his Origin career with a desperate offload on the last tackle that only goes to hand when the game is running all your way.

Playing with the exuberance and energy you would expect of a game of such magnitude the two teams traded errors and penalties in the opening 12 minutes but the Blues were unable to convert a possession rate nearing 60 per cent into points.

Queensland showed their intent early with expansive shifts to both sides of the field and their clinical execution yielded results in the 15th minute when Billy Slater cut back and sparked a left-edge raid that finished with Morgan delivering another pass in a big moment for Holmes to score the first of his two first-half tries in the corner.

The old firm of Smith, Slater and Cronk looked to have doubled their advantage from the next set of six only for a desperate lunge by Brett Morris to jolt the ball free of Cronk's grasp as he dived over the try-line to the right of the posts but there was more brilliance to come.

Making a mockery of the suggestion his ineffectiveness is dulling with age Smith sliced through some awful Blues defence in the 25th minute to put Josh Papalii on a charge toward the line but it was Cronk's tracer-like inside-out banana kick to the corner that hit Holmes square on the chest from the next play that brought the sold-out crowd to its feet in rapturous admiration.

As the Blues tried to bash their way through the middle the Maroons continued to attack at every opportunity, Smith and Cronk providing the steady hand to a bunch of youngsters eager to show off on the game's greatest stage.

The 12-point lead they took into half-time could have been far greater such was their dominance and should have been after Smith chanced his hand by going himself after Tim Glasby had collected a ball that bounced off Matt Gillett's head only to be brought down 10 metres short.

An error from Cordner two minutes in on halfway gave Queensland an early shot in the second half and if Slater's one-handed offload to Will Chambers was even slightly softer they most likely would have had their third.

As many were waiting for Queensland to put the Blues out of the misery James Maloney threw up a Hail Mary to the corner and Josh Dugan somehow plucked it from the grasp of Holmes before running around to bridge the gap to just six points with 30 minutes left to play.

Some swarming Blues defence at the end of the next set pressured Queensland on their line for the first time in the game and a Will Chambers error and subsequent penalty had the Maroons under the pump but any resistance would be short-lived.

Munster, Holmes, Napa and Wallace showed that Queensland's dominance of the past 12 years could continue on for another decade but there were few better on the field than Man of the Match Smith and Slater, who brought the skill and the speed to worry the Blues at almost every turn.

The Blues forwards – hailed as their trump card all series – barely made a dent all night and are now left to wonder how they can possibly break the stranglehold of a team who came back from a record loss in Game One to win by blooding eight rookies and without some of the greatest players the game has ever seen.