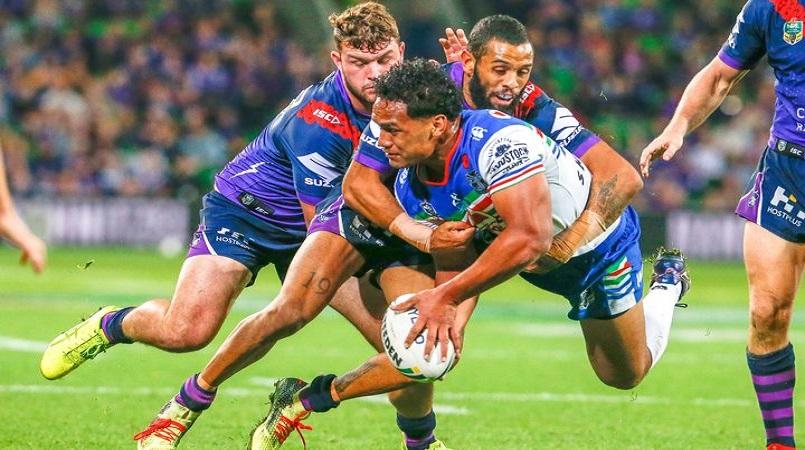 The Melbourne Storm thrashed the Warriors 50-10 in their annual Anzac Day showdown.

Melbourne skipper Cameron Smith was asked in the lead-up to their Anzac Day match if a win over NRL premiership contenders the Warriors meant the Storm were back and his team gave an emphatic answer at AAMI Park in Melbourne, delivering a statement that they wouldn't be handing over their title without a fight.

The Warriors came into the annual clash, hyped up having only dropped one game, while the Storm had won their previous two after a patchy start to the season.

But the visitors were humiliated in the first half as the defending champions scored six of their eight tries for a 36-0 lead.

More than half of those tries could make the Storm show-reel, with clever kicking by Cameron Munster and Billy Slater and pure speed from Curtis Scott and Josh Addo-Carr contributing to the haul.

Winger Addo-Carr did his chances of a State of Origin call-up no harm with an 80-metre dash to the line, while he added another try in the second half.

Smith also did his part, converting all eight tries as well as a penalty goal.

In the only downer for the Storm, Scott was carried from the field in the 57th minute after the young centre appeared to suffer a high-ankle sprain in a tackle.

The Warriors also had a major casualty, losing star hooker Issac Luke for the match midway through the first half with a knee injury.

Storm halfback Ryley Jacks scored in the third minute after Slater and winger Young Tonumaipea put through back-to-back pin-point kicks. It took only 10 minutes for the floodgates to open.

Melbourne scored three tries within six minutes to stun the Warriors, with back- rower Ryan Hoffman, prop Christian Welch and Slater all crossing to put the game out of their rivals' reach.

To the Warriors' credit, they held their heads up and were first on the scoreboard in the second half, when they sent the ball wide to a diving David Fusitu'a.

The Warriors continued to threaten but the Storm's defence was almost as good as their attack, continually repelling their opponents and forcing them into errors.

Fusitua'a scored a similar second try in the 59th minute but it was the Storm's night to celebrate.