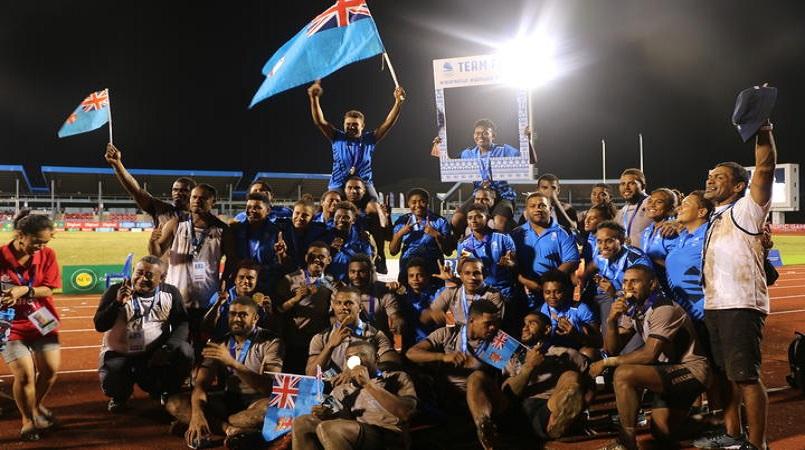 Fiji won gold in the men's and women's rugby league nines on a historic night at the Pacific Games, beating Papua New Guinea in both finals.

The women prevailed 16-4 in the gold medal match at Apia Park to become the event's first ever women's rugby league champions.

Fiji captain Timaima Ravisa opened the scoring with a breakaway try late in the first half and capped the result with an intercept try after the full-time siren had sounded.

An emotional Ravisa said PNG is a tough team to beat but they worked hard on defence and were able to capitalise on their opponents mistakes.

"For the girls we only had one goal today for this tournament was to bring back the gold, to get the gold back to Fiji. The girls hold onto their aims, to their personal goals and the team goals, and the message was don't let PNG get across our defence line," she said.

It's been a historic few weeks for the Fiji women, who also beat PNG in their first 13-a-side test match last month.

Timaima Ravisa was a part of both occasions and said it's an exciting time for the women's game in Fiji.

The Fiji men upset defending champions Papua New Guinea 14-0 in the final to repeat their gold medal winning performance from the 2007 Pacific Games in Samoa.

The Fijians led 4-0 at half-time and captain Luke Nadurutalo said they had to work hard to grind out a tough win in difficult conditions.

"The boys were really tired at half-time but I kept telling the boys this is not the end - we have to work really hard in order to get that gold," he said.

The Fiji men failed to medal at the last Pacific Games in Port Moresby and Luke Nadurutalo said the team used that history as motivation over the last two days.

"It had always been every South Pacific Games tournament because we all know that PNG holds that victory all along so we didn't come just to win silver or bronze - we came with that motive to win the gold and then we did it," he said.