Emotions get the better of Slater 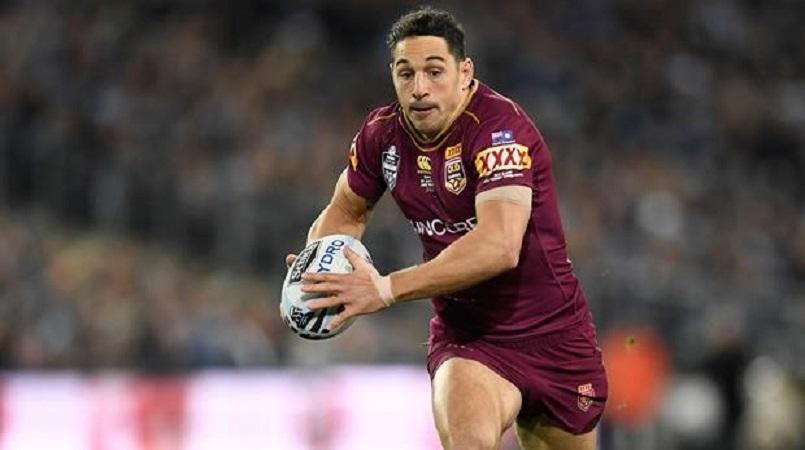 Billy Slater's comeback to the Queensland side has been well publicized in the past fortnight but the man himself was just happy to be back having a beer with his Maroons teammates.

Slater feared at times his career would end prematurely after season-ending shoulder injuries in the past two seasons.

The former Kangaroos fullback was visibly emotional during an interview on-field following the side's two-point victory and Slater admitted the successful comeback got the better of him with the Maroons pulling off a miracle to level the State of Origin series at 1-1 heading into the decider at Suncorp Stadium in July 12.

Slater was back to his usual roaming best and looked at home in the No.1 jersey, while his battle with former Storm teammate James Maloney throughout the contest added to the theatre.

"The last two years just come rolling back and all the emotions… it's certainly been a rollercoaster. I honestly didn't know if I was going to play another game of football let alone be at ANZ Stadium in front of a packed house and be involved in an Origin match like that," Slater said after the win.

"I got a little bit choked up and [was] just hit with a question and I didn't think I would. It took me back to the dark days and tough times to remind me it was all worth it."

Slater believes his stint on the sidelines offered him a new perspective on the game and anything he may have ever taken for granted.

"[You miss] the emotion involved in rugby league and that's one thing I've sat back and enjoyed since I've come back," he said.

"Not that you didn't enjoy it before but you understand the emotion side of rugby league and little moments like sitting in the rooms after the game having a beer with your teammates – they're the things I've missed since I've been back.

"It's been a long time and two years since I last played and to come back from 16-6 down and beat NSW who have got an outstanding side was just Queensland spirit.

‌While the future of Johnathan Thurston in the Maroons jersey has been confirmed with the playmaker set to be farewelled at Suncorp Stadium in three weeks’ times, both Slater and Cooper Cronk continue to be questioned as to whether the fixture will also be their last in the Origin arena.

Cronk's departure from the Melbourne Storm at the end of the season for a move to Sydney prompts speculation the 33-year-old could retire after the Rugby League World Cup.

Slater on the other hand was more confident in going around again in 2018 for the Maroons – should they select him.

"I just don't know, until I sit down and nut out what I want to do next year and whether I can put 100 per cent in to next year, I'll make that decision in due course.

"At the moment I'm feeling really good, the body is in a really healthy spot and I'm enjoying my football.

"That's why I went through all that hard work to get back so there's more chance than not of me playing next year."

Slater had admiration for Thurston, who ensured the series remained alive heading for his final appearance in Queensland by converting Dane Gagai's 77th-minute try.

"I had the ball after Gags scored that last try and gave it to Johnno and just said 'this is what you're about here mate' and he looked at me and went 'yep' so I knew it was going over from then," Slater said.

"He's a tough competitor and copped a couple of whacks. There is no tougher league player than Johnathan Thurston – he is half the size of a lot of them but puts his body in front and we see all the great plays that he makes.

"He was that confident and we see all those plays but just the toughness he displays typifies what this jersey is al about.

"That calmness rubbed off on everyone, we were down by 10 points and NSW scored some good tries opening us up in that middle third, but we weren't panicking."