Billy Slater goes out with a win 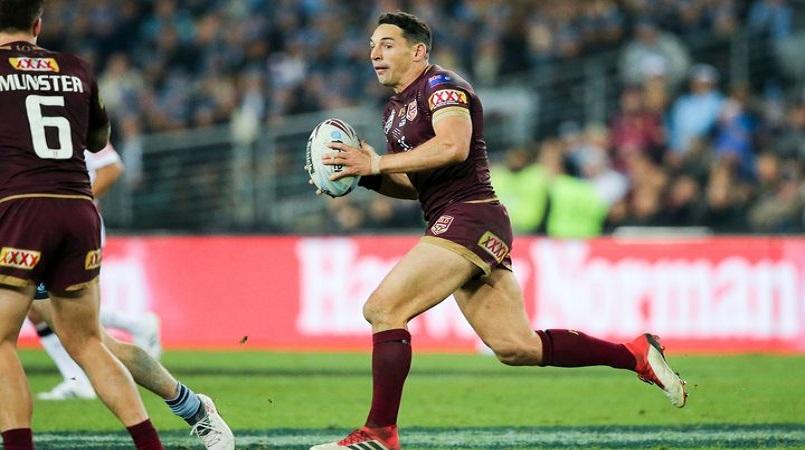 A relieved Billy Slater says he's leaving Queensland in good hands after delivering what he believes the new-look Maroons needed most - that winning feeling.

Queensland provided one final highlight for stand-in skipper Slater, downing NSW 18-12 in State of Origin III in Brisbane in a fitting farewell for the veteran fullback.

Polarising Maroons playmaker Daly Cherry-Evans was a standout after ending three years in the Origin wilderness.

After his 31st and final Origin, Slater said it was vital for the Maroons' future that he helped deny the Blues their first series whitewash in 18 years.

"I was disappointed the fellas hadn't had that Origin winning feeling," Slater said.

"I really wanted to deliver that to them because it is important. There were a few guys who hadn't felt it this year.

"They (NSW) earnt their series win this year, we need to learn from that but we needed that win - there is a bright future."

Next year the Maroons will be without the Big Four after Slater bowed out in style.

He not only earned man of the match honours but was also controversially awarded the Wally Lewis Medal as player of the series despite missing the Melbourne opener with injury.

Slater was Queensland captain for the first time in his final game after stepping in for Greg Inglis (broken thumb).

Slater's representative retirement ensures Inglis will be the last man standing from Queensland's 2006 side which sparked their stunning run of 11 series wins in the last 12 years.

But Slater walks away with no regrets, all but anointing Newcastle's Kalyn Ponga as his fullback replacement.

"Queensland is in a really good position. We have a great squad," Slater said.

"Look at Kayln Ponga and what he did in game two - we are in good hands."

Queensland coach Kevin Walters may have suffered his first series defeat in his third year at the helm but he is relieved to send Slater out a winner.

"That was important for us as a team to get something out of the series and secondly to send Billy Slater out of this arena a winner," Walters said.

"It really does set us up for the next two or three years."

Walters' luck this year only seemed to get worse after Smith announced his shock representative retirement weeks before the series.

But Walters now holds no fears for the future thanks to the legacy left by the likes of Slater.

"All those great players of the last 12 years have left a great footprint on what to do at this level to be successful," he said.

"We have to learn from that but I think our guys in the shed learnt a lot about Origin just by getting that win."