All Blacks rally to beat Barbarians 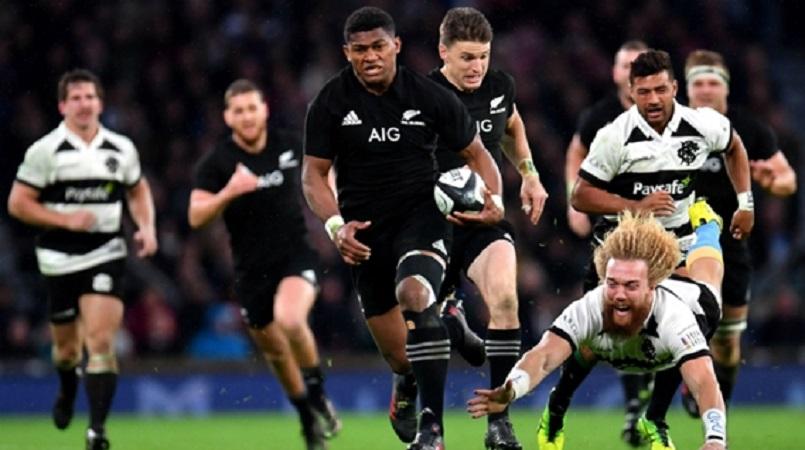 An unfamiliar All Blacks team recovered from a slow start to beat a Barbarians side packed with New Zealanders 31-22 at Twickenham, where Waisake Naholo starred for the world champions.

Led by former Wallabies coach Robbie Deans, the Barbarians were 17-10 ahead at half-time on Saturday thanks to tries from Kiwi pair Richie Mo'unga and George Bridge, as well as Australian Sam Carter.

Steve Hansen's men, missing a host of rested and injured regulars, remained in sight thanks to TJ Perenara and Vaea Fifita's scores.

For all their good early work, the Barbarians were blown away in the space of six second-half minutes, as Ngani Laumape, Sam Cane and Nathan Harris all crossed to turn the match on its head.

Temporary captain Beauden Barrett converted all three tries to make it 31-17, as the out-of-favour Julian Savea, overlooked for New Zealand's November internationals and appearing for the Barbarians against his countrymen, had a quiet match by his own high standards in west London.

The same cannot be said of wing Naholo, who lit up the first half by dancing through two attempted tackles right on the touchline to return Perenara's offload and allow the scrum-half to claim his team's first try.

Laumape, meanwhile, a man nicknamed the Mini Bus, was instrumental in driving the All Blacks' second-half onslaught, the massed ranks of the Barbarians defence proving unable to stop the Hurricanes centre from barging over in the 53rd minute.

Deans' side refused to give up but were unable to muster an effective response until the last minute of the game, a breakaway Bridge try reducing the deficit after Tim Perry, Matt Duffie and Asafo Aumua all received New Zealand debuts off the bench.

The victory leaves the Rugby Championship winners to prepare for more searching examinations against France, Scotland and Wales, when the All Blacks XV is likely to take on a more predictable appearance.