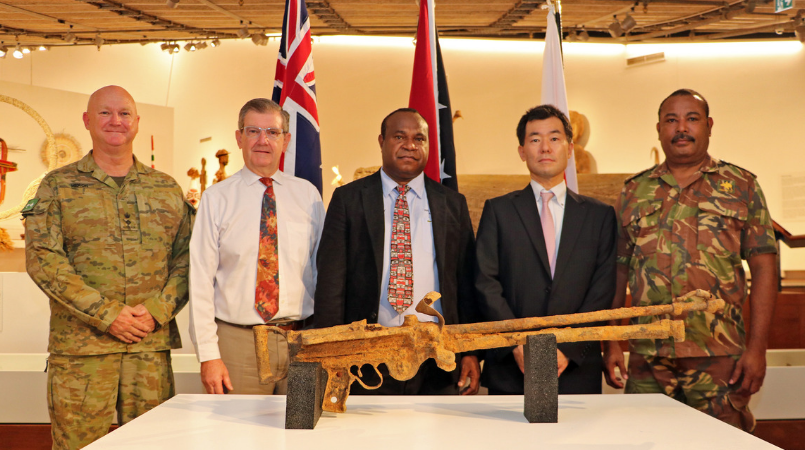 Representatives from the Japanese Embassy to Papua New Guinea were also present for the occasion.

The war relic was discovered on 2 September 2019 by a construction crew working on the Australian government funded ANGAU Hospital redevelopment in Lae, Morobe Province.

The machine gun, potentially the first of its kind to be discovered in Papua New Guinea, is likely to have come from a Japanese warplane between 1942 and 1943 and was found during hospital excavations. As part of PNG’s history, the relic will be stored by NMAG for conservation.

Dr Moutu highlighted the importance of conserving military artifacts when receving the relic on Friday.

He said: “Military heritage artefacts provide a physical link to the past, and serve as touchstones to help us remember and retell stories from the war. NMAG is pleased to add this significant item to our collections.”

The ANGAU Hospital redevelopment, which is scheduled for completion in late 2020, is one of the largest health infrastructure projects in PNG’s history and part of the Papua New Guinea-Australia Partnership commitment to strengthening healthcare in PNG.

“Australia is delighted to continue our ongoing support for NMAG, a world class facility,” says the Australian High Commission.

“Through the Kokoda Initiative, NMAG and Australia partner to manage, protect and conserve military heritage and historical artefacts in Papua New Guinea.”