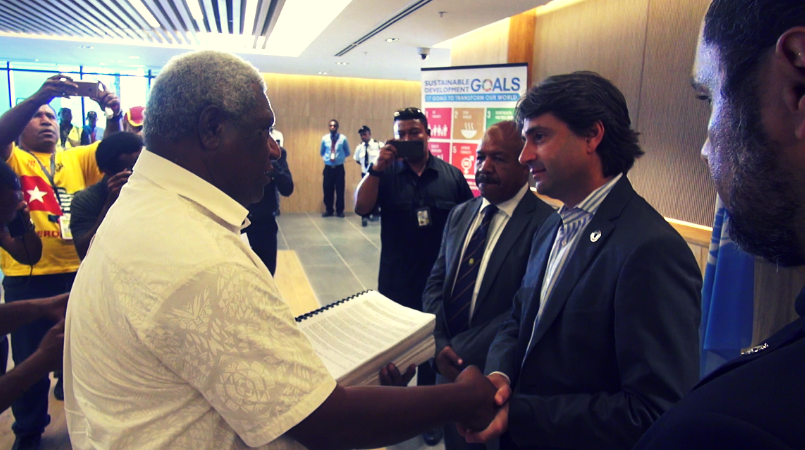 UN resident coordinator Gianluca Rampolla received two petitions – one by West Papuans and the other by neighbouring PNG citizens –demanding the organisation to immediately intervene and address the humanitarian crisis in the region.

Additionally, the petition initiated by NCD Governor Powes Parkop, with the support of his Northern counterpart Gary Juffa, PNG Council of Churches, NGOs and others, also demands the UN to immediately implement the recent Pacific Island Forum’s resolution on West Papua for Indonesia to invite United Nation’s Commissioner for Human Rights, Michelle Bachelet, and her technical team for a trip and investigate the allegations of gross abuse on human rights and genocide, and hold those responsible accountable.

General Secretary of PNG Council of Churches Reverend Roger Joseph handed over the petitions to Rampolla after a gathering at Sir John Guise Stadium.

UN protocols prohibit resident delegates to come out and receive petitions at open spaces like the stadium, as was initially anticipated.

Reverend Joseph said the people of PNG sympathise with their neighbours and are showing solidarity through the petition, which was supported by 12,490 signatures that were collected in only five days. The signatures exclude more than 2,000 collected in Mt Hagen, Western Highlands Province.

Whilst receiving the petitions, Rampolla said he was aware of many calls which have been made to the UN to step in and contain the situation, adding the organisation was doing what is possible under its capacity.

He cited that last month the UN Commissioner for Human Rights, Bachelet, was calling on Indonesia to establish dialogue with the independence movement leaders to stop further escalation of violence and to ensure all grievances can be addressed amicably.

Her visit, which was resolved at the Pacific Island Forum, was blocked by Indonesia initially due to security reasons; the visit is being renegotiated, Rampolla said.

“From our side in PNG, we are working with central government with local authorities, PNG Defence Force and National Disaster Centre to pave plans to ensure that if refugees are coming in, we are well prepared to receive them in a dignified way,” he said.

He assured that he would forward the petitions to the UN Head Office in New York and relay the feedback to the people and the leaders.

During the presentation, Juffa said neighbouring PNG people were obligated to speak against the autocratic rule of Indonesia against the Melanesian people of West Papua.

Governor Juffa called on the UN to go back to history and fix the 1969 Act of Free Choice Vote under which handpicked only 1026 West Papuans out of over one million people then to have decided their political fate directly undermining UN principles of ‘One Vote, One Person’.

Outside the UN Office, NCD Governor Parkop said the petition was only one of the many strategies for the worthy cause.

Commending PNG citizens for their solidarity, he outlined that he, with his fellow governors, would lead a nationwide workshop on the plight of West Papua to garner more support.

He added that he would be leading more rallies in the lead up to the Melanesian Spearhead Group meeting in Port Moresby at the end of this month, calling on PNG and Fiji to support West Papua become a full MSG member.

Parkop was leading NGOs, PNG Council of Churches, students, disciplined forces and others in the city to petition the resident office of the United Nations Organisation on Friday at the Sir John Guise Stadium.

He said many local MPs have thrown their support against the gross abuse of human rights and genocide in the region during their conversations but have not spoken out publicly against it due to the government’s foreign policy on West Papua.

The event was planned as the deadliest violence and prolonged protest for self-determination tightened its grip over Papua and West Papua provinces of Indonesia, where dozens have been killed while others have been injured.

The petition is the culmination of two solidarity marches hosted in the city so far.

Parkop, a vocal human rights lawyer before becoming politician, said everyone in the country and across the Pacific Region should further support the right side of history to fix controversies sparked off by 1969 Act of Free Choice Vote, which only allowed 1,026 indigenous West Papuans out of over 1 million population to decide the fate of their political freedom.

He also called on Indonesian President Jokowi and his people to understand that if he continues to use suppression, oppression and terror, they will continue to lose respect of not just the West Papuans but PNG and the Pacific as a whole.

Governor Parkop continued that the strategies used thus far by Indonesia has only exacerbated the problem and not contributing to the long-term solution.

“No matter what Indonesians does or says, it is not about developments or it is not about services, but it is about the dignity of our people and their freedom. They have never been treated equally like human beings,” he said.

In 1969, he said, their population was close to a million whilst PNG had 1.5 million, adding after 57 years, the latter has close to 10 million people whilst West Papua has less than 2 million.

He cited that they were systematically killed and denied socio-economic progress, saying there is no better time in history than now.

Jeffrey Bomanak, an OPM leader, said the proliferation of military and Jihads presence in the region will not suppress their aspirations for independence.