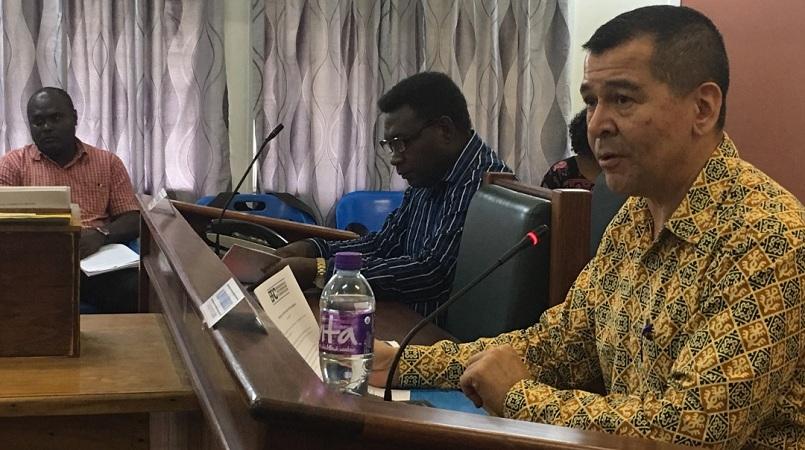 Commissioner Patrick Nisira and Chief Referendum Officer, Mauricio Claudio, told Members that the Commission was on track to deliver polling, commencing 23 November, and called on their assistance to deliver clear and simple messages about the upcoming public display of the Preliminary Roll.

“We have recently travelled around Bougainville to consult with 37 community governments, and we’re satisfied that this will be a peaceful referendum. People are taking ownership of the process and are ensuring that they are prepared, and also maintaining a peaceful environment,” Nisira said.

“We are managing our costs and logistics within the budget and six-week extension provided by the two governments, and there will be no more delays, extensions or deferrals.”

Deputy Speaker, Francesca Semoso, and others commended the Commission on its comprehensive progress report, but raised questions regarding whether the ballot paper would be publicly displayed ahead of polling, and whether the new date provided by the two governments was legal.

The Chief Referendum Officer assured the House that while dates are for the two governments and not the BRC, it was the legal opinion of the Commission and the two governments that the exchange of letters by the two heads of government announcing the six-week extension was legal.

“We do note however, the intention of the Prime Minister and Acting President to formalise this decision at the next meeting of the Joint Supervisory Body,” Claudio said.

The Commission also assured the Member for Selau, Joseph Watawi, that the final ballot paper design, containing the text agreed to by both governments, would be made available on awareness posters well ahead of polling.

Commissioner Nisira said they were focusing on each step of the process, and providing information in phases to ensure people were well informed.

The public display, beginning in Bougainville in the first week of September, for three weeks, will require everyone to check the Preliminary Roll displayed in their Ward to ensure they are enrolled correctly; complete an enrolment form if not; and tell their Ward Recorder if any names were not eligible according to the referendum criteria. Specific information and dates will be provided to those living outside Bougainville shortly.

The briefing also covered the strong turnout of Bougainvilleans enrolling across Bougainville, as well as those living elsewhere in Papua New Guinea. Final numbers would be known when the Preliminary Roll is finalised at the end of the month.

“The Commission certainly has raised the bar for electoral participation in Papua New Guinea,” Claudio said. “This is the first time enrolment of Bougainvilleans living in PNG provinces has taken place, and the first time PNG citizens (who are eligible Bougainvilleans) have been enrolled overseas.

“The three-week public display process is critical. It places responsibility on voters to ensure they are enrolled, and also to help ensure the roll is a credible.”

A summary of polling and counting procedures was also provided: