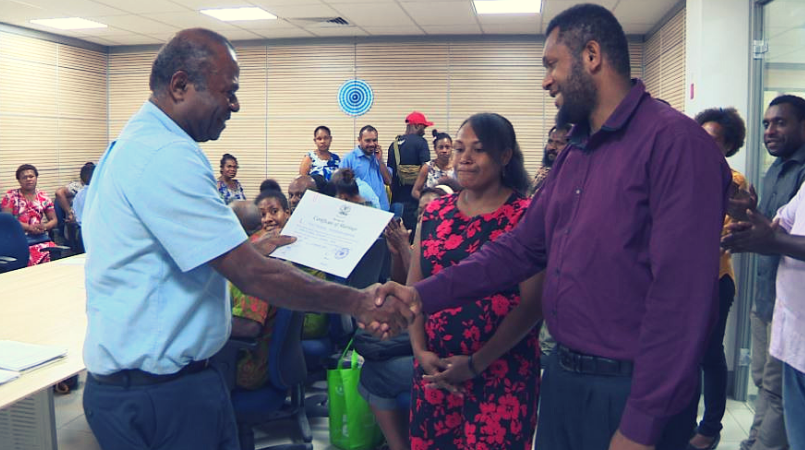 The Civil Identity Registry on Friday facilitated the civil marriage of seven employees of PNG Power – the first mass marriage ceremony organised and conducted by the NID office.

The Civil Identity Registry carries out five main functions, basically monitoring the life of an individual from birth to death. All these functions are besides the National Identification Project which carries one’s identity records.

“When a couple adopts a child we do the adoptions, and that also is in partnership with the community development section because there’s social welfare involved, ours is more on the statistics side because we collect data only.

“And when they divorce, unfortunately some do happen and in life, and couples do decide to split, and we don’t encourage it over here but we would have to issue divorce certificate. After that obviously when a person dies we issue the death certificate.”

Data from the Civil Identity Registry shows that there are 300 civil marriages registered.

On Friday seven couples added to that with the first civil institutional marriage, conducted at the Civil Identity Registry office.

“For us now it’s an honour to have you and host the PNG Power team because it’s the first government institution that we are doing, and it’s the first because we’ve never done marriages for any other institutions,” stated Mobiha.

And as like any other marriage ceremony, the couples read their vows.

The process can take up to three weeks at the Civil Identity Registry, after filling what is called Form 4, meeting all the requirements and paying a fee of K270 for such a civil marriage to be conducted.

“A lot of marriages take place in churches and through customary but there is no documentation in place. Also customary marriage is not recognised outside the country so better we encourage all to come forward and conduct civil marriages,” said Team leader Marriage PNGCIR, Francisca Mumuni.