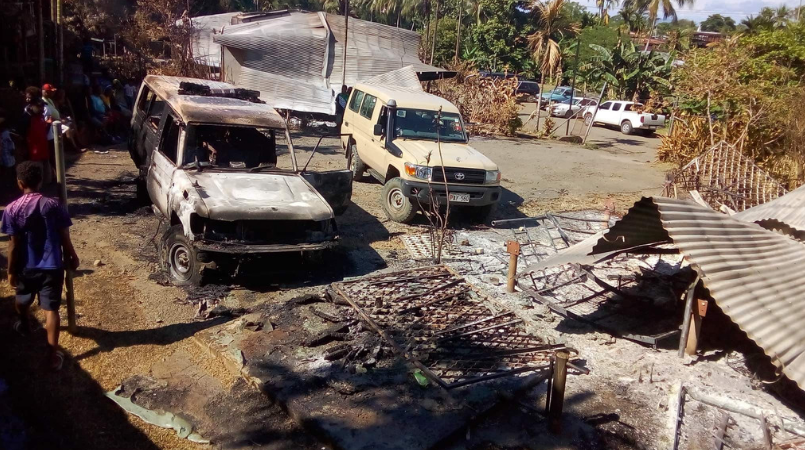 The Alotau township of Milne Bay Province is still on high alert as of January 24th as police maintain order despite threats received from notorious prison escapee and gang leader Tommy Baker and his gang members.

A 40-men team from the Police Air Tactical Unit flew into Alotau early Friday morning to maintain law and order.

Deputy Commissioner of Police and Chief of Operations, Jim Andrews, said they will be followed later by an investigative team of detectives and forensic officers from Port Moresby.

Milne Bay Provincial Police Commander Chief Inspector George Bayagau said business houses have opened but have been told to be on high alert.

The town went on lockdown after one of Baker’s accomplice, identified as Michael Yauwi, or better known by the nickname Mekere, mobilised a group of around twenty youths and exchanged fire with the police on January 23rd.

PPC Bayagau said they have told Mekere’s parents numerous times to take responsibility and surrender their son to police. The parent’s home is next to the Police Barracks on Misima Street.

Mekere reportedly visited his parent’s home regularly and issued threats to shoot police. Police in Alotau considered the property a haven for criminals so allegedly burnt down the house.

Police say Mekere, Baker, Ilenia Tarua and Andrew Loniko Kelebi, and more than 20 youths, many of whom as young as 15, stormed Alotau town on Wednesday.

The suspects were believed to be high on alcohol, drugs and heavily armed with homemade guns and high powered rifles.

Police reported that before going to the police barracks, the suspects noticed a white vehicle parked just before the road leading to the barracks, and shot the driver of the vehicle.

He died instantly but his wife managed to escape. The driver was the provincial legal officer from Central Province.

PPC Bayagau said five of his young police constables stood firmly and kept the gang members at bay until they exhausted all their ammunitions. The exchange lasted for three hours.

He confirmed that his official police vehicle was burnt along with eight police houses while some houses at the back of the barracks were broken into and looted.

He said families of the policemen were told to get out of their houses before they set them on fire.

Baker and his gang then looted the Asian shop Boboana Supermarket and even invited the public to go in and help themselves.

An ATM machine belonging to the Alotau International Hotel was stolen and the criminals then escaped in two government vehicles before dawn on January 24th.

He also confirmed being shot at whilst he was in his house but luckily escaped unhurt.

“I thank God I’m still alive, it was a very dangerous situation,” he commented.

PPC Bayagau also confirmed that one of the gang members, Tarua, was shot dead during the exchange and his body is now at the Alotau morgue, while another wounded gang member is being hospitalised at the Intensive Care Unit.

No arrests have been made yet.

One of his young constable sustained pellet wounds but his condition remains stable, while a woman and a child were burnt to death when the buildings were set alight.

Many people on social media are calling Baker PNG’s ‘Robin Hood’. But PPC Bayagau believes Baker is a criminal and must not be compared as such.

“His act of kindness is for his own survival,” Bayagau said. “Baker is enjoying community support because he shares what he steals with the people. However, the people must realise that they are supporting a criminal.”

“They are also equally guilty for receiving stolen property. But what is alarming is that Baker does not care about using the members of the public as human shields whilst he is committing these crimes.”

PPC Bayagau is appealing to the people of Alotau to come forward and return the items that were stolen at the Boboana supermarket. Anyone found to have taken part in stealing from the supermarket will be charged for stealing.

Meanwhile, Deputy Commissioner Andrews assured the public that the police investigations will be thorough and will also look at police conduct leading up to the recent violence.