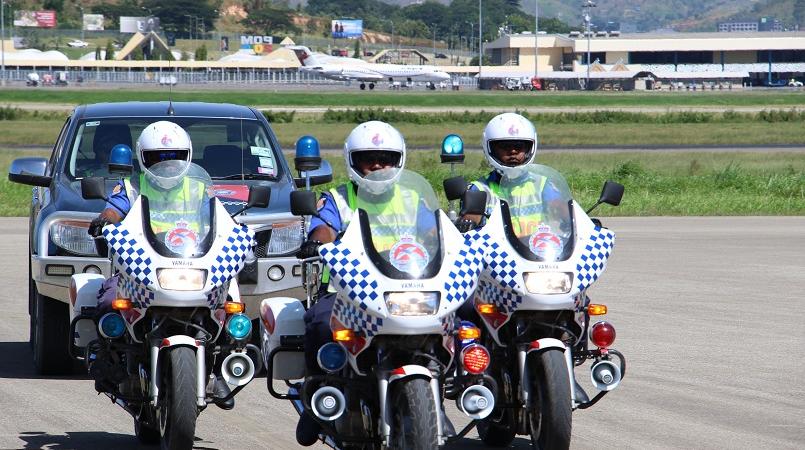 The RPNGC motorcade training is a program to develop up to 80 motor cycle officers that are required for the expected 21 or 25 motorcades that will be conducted at any one time for the APEC Summit in 2018.

“They ride the motorcycle and we’ve just enhanced their skills and they will be used to assist as the training progresses to help identify riders of motorcycles.

Smith said motor cycles are not very common in PNG so trying to find some depth in skill is quite unique as we’re working together in partnership.

He said a progressive training model is being used to try to identify people who can ride a bicycle or a scooter and then looking at the skills to enhance them to work their way up to police motor cycles.

The program is a three week course that basically starts off with two weeks   of rider skill enhancement and a week of practical scenario training including motorcade operations.

The graduating group was used during the visit of the Australian Governor-General as well as the Prime Minister’s visit a few weeks before that.

The training is based on similar models used in Australia and other countries and is a pacific modified version as the skill required in PNG like the roads and conditions are different from Australia.

“The officers have had some good practical experience in the training and have done a fantastic job and their skills have increased remarkably,” Smith said.

The officer did a practice run of the three main different types of motorcades.

The first one being the ceremonial motorcade which had three motorcycles running in up front of the vehicle called the ceremonial or arrow head and is mainly used for royalty like the Governor-General or the Queen.

That is where the traffic is controlled and intersections are blocked.

The second practice motorcade is for the movement of dignitaries or the Prime Minister or any person of importance where there is no traffic control along the way and police are on points.

The motorcycle are outriders and they provide a mobile of traffic control model of leap frogging ahead to clear traffic so the motorcade can move slowly.

The third practice was on the APEC model and is a combination of both.

For APEC, most of the riders are expected to have some form of traffic control due to the nature and the riders have to be trained in the operational motorcade model just in case traffic is blocked.