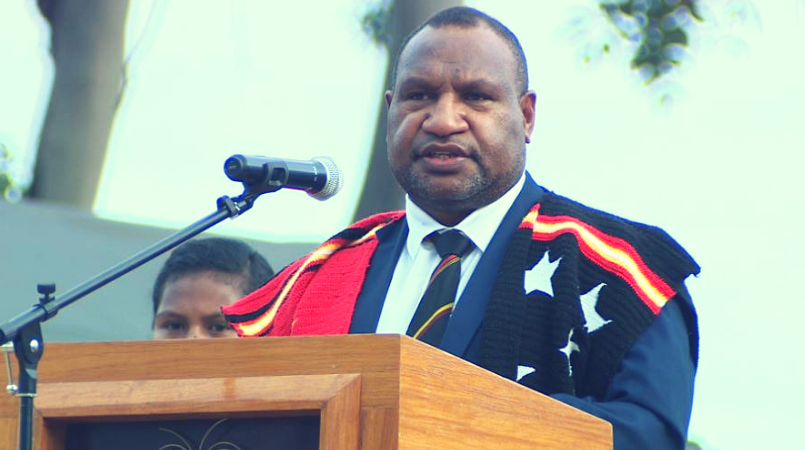 Prime Minister James Marape has committed himself to not be bought or sold to corporate and individual greed but stand for the greater good of my PNG.

The Prime Minister made the pledge today in his keynote address marking the 44th anniversary of PNG.

Hundreds gathered at the Independence Hill as early as 4:30am to witness the Flag Raising Ceremony, hosted by Speaker of Parliament, Job Pomat.

It was also attended by members of the Diplomatic Corp and senior Government officials.

The ceremony included the procession, blessing and raising of the flag.

In his first Independence keynote speech, Prime Minister Marape highlighted how PNG is blessed with all forms of natural resources and the need for all Papua New Guineans to benefit from it.

The Prime Minister made a pledge to be the chief servant and ensure PNG becomes the richest, black Christian nation in the next 10 years.

“Today on the anniversary of 44 years of independence, I as your eighth Prime Minister pledge to you my firm commitment that I will not be bought or sold to corporate and individual greed but stand resolved  for the greater good of my PNG,” said Marape.

“I ask you all, Members of Parliament, Ministers of State, every public servants and all citizens of this country, no magic or dreams with no efforts will get us out of present poverty into rich and fullness of life.

“It starts with each and every citizen living as Christians, must live in harmony with one another, do unto others what you want others to do to you and working productively with your brains and hands.”

Marape announced that economic independence is the government’s first and foremost priority.

“Proper harvest of our natural resources and equitable sharing with our investors plus better redistribution to our landowners and provincial governments will ensure we move towards economic independence.

“Economic independence is my government’s first and foremost priority born of Pangu Party’s  dogma of complementing the political independence Pangu Party led PNG into in 1975.

“By 2025, when our nation celebrates 50 years of independence, I want to look back to today in 2019 as the year in which my generation of reformist leaders changed legislative gears for truly better harvest of our God given natural resources.

“In this, I envisage economic independence to liberate our citizens of poor health services, low quality of education, poverty lifestyle, dilapidated infrastructures and unsafe lawless society to one of top quality education and health services accessible to all citizens and residents, peace and harmonious society, connectivity of all hamlets, villages, towns, cities and provinces through roads, bridges, ports, airports, electricity and digital communications.”

Prime Minister Marape called on everyone to join hands and work together to reach his vision of making PNG become the richest, black Christian nation.