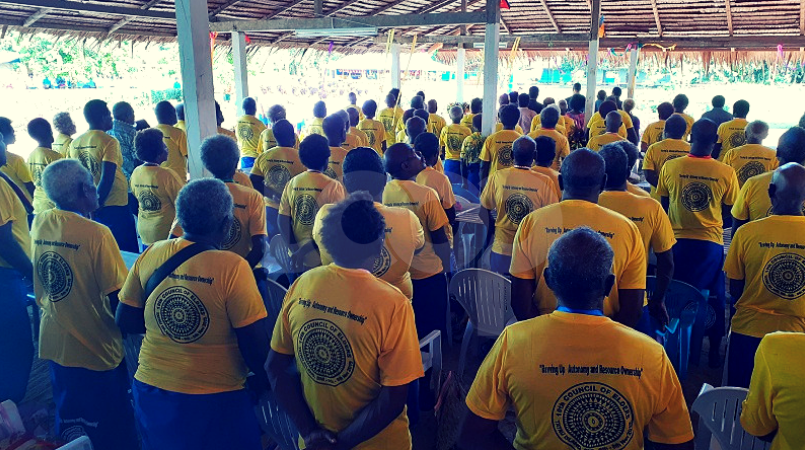 Representatives from the 10 local level governments and 142 wards of New Ireland Province were on Tabar Island for the 10th Council of Elders conference.

The annual event, which started in 2009, is unique to New Ireland Province.

180 local men and women leaders started arriving by boat on November 6th for the three-day forum at Tatau, which was officially opened that same evening by chairman of the Council of Elders, Sir Noel Levi.

Sir Noel said the forum was initiated to get views from local leaders on how to effectively serve the people of New Ireland. This is based on the fact that LLG and ward leaders, especially the elders, have an in-depth knowledge of issues and concerns that are unique to their respective areas.

“That is why we host the Council of Elders, to capture the learned wisdom and knowledge of those of us who have travelled the long and winded road,” added Governor Sir Julius.

This year’s theme is “Revving up autonomy and resource ownership”. Governor Sir Julius says these are two subjects that the New Ireland Government has been fighting for since he came into office in 2007.

“And believe me, we have gone to battle with the National Government to ensure our visions and aspirations for an Autonomous New Ireland are heard.

“We took a leap forward with the signing of the service delivery agreement at Tanga last year during this very occasion. And we continue to make groundbreaking changes with New Ireland at the forefront of amending the Mining Act of 1992.

“We are the custodians of our own resources,” continued Sir Julius.

“We owe it to our future generation to leave something for them – whether it is land, minerals, marine life or our vast natural environment.