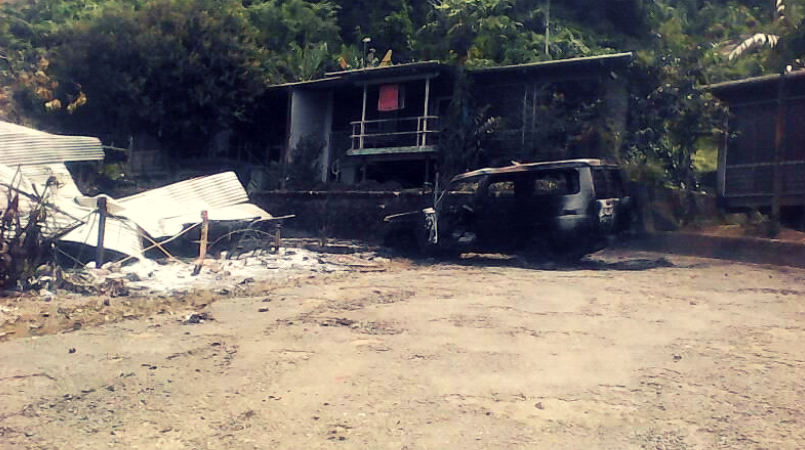 A young mother and her four-year-old son were burnt to ashes in Alotau, Milne Bay Province, on the night of Wednesday January 23rd at the police barracks.

The two bodies were found in the toilet compartment of unit six of the police duplex that was set on fire allegedly by Alotau’s notorious criminal gang leader Tommy Baker and his members. The son was found next to the toilet pot and the mother not far from him, all covered in ashes.

The sad discovery was made early the next morning when PNG Power and the Provincial Works Unit were called in to assess and assist clear the ruins of the burnt houses in the police barracks.

Milne Bay Provincial Police Commander Chief Inspector George Bayagau confirmed that the deceased woman was from the Goodenough Island who had gone to stay with an uncle at the police barracks. The uncle is a Senior Constable in the Royal Papua New Guinea Constabulary.

Police believe the woman and her son had locked themselves in the toilet when the police were exchanging gun fire with the criminals.

Chief Inspector Bayagau said it was a heavy gun battle and everyone was told to run up towards the mountains behind the barracks.

“Our lives were threatened and everyone ran for their lives,” he said.

He says it was very unfortunate for the young mother, believed to be in her early 30s, who did not know where to go when all this was happening.

He said the woman’s husband however, was safe with everyone else thinking the wife and son were also amongst the crowd who had taken refuge up in the mountain.

Chief Inspector Bayagau said even though outnumbered, his five young constables stood firmly and fought back the heavy gunfire which was just between the PPC’s house and the unit 6 duplex where the mother and son died. This incident happened around 7.30pm on Wednesday night.

The Senior Constable and his wife and children are all safe along with the husband of deceased woman. Bayagau is yet to get a report from his officer who has left the barracks to take shelter with relatives.

Chief Inspector Bayagau also confirmed that the nine families who lost their homes and properties are living with relatives and church organisations who have come forward to assist them.

Five units at the Sanderson Bay transit unit have been given to accommodate the police personnel and their families.

He is appealing to the local people to come forward with any information to assist with their investigations. He also said that many people have left their homes in fear of police retaliation.

Chief Inspector Bayagau said: “They think the police will retaliate, but that is the wrong mind-set.

“Innocent lives have been affected and lost. We will only deal with the law breakers and they will feel the full brunt of the law. We need your assistance in providing information to help the police catch the criminals.

“Let’s work together. Community partnership is vital to regain trust of the Police Force so we can all stop living in fear and restore peace in Alotau.”

Chief Inspector Bayagau has asked those families who lost their homes to go back, check and record what they have lost in the fire. He is also working to get electricity back in the barracks again.

Meanwhile, no arrest has been made yet but many leads have surfaced in relation to the two government vehicles that were used to escape. They were abandoned at Figo village near the Padipadi Oil Palm Estate.

He said many people have been brought in for interrogation and even coming in and testifying voluntarily. He said everything is now back to normal and it’s business as usual in Alotau.

Chief Inspector Bayagau is working in collaboration with the NCD/Central and Oro Police as well as the Air Tactical Unit who had just flow in from Port Moresby on Friday morning. Units have been sent to the borders of the three provinces to monitor movement of the criminal gang.

He believes a number of the gang members are injured and will have to get treated before they can make any move outside of Alotau.

“We have all the possible exits covered and monitored now,” Chief Inspector Bayagau said, confident that it was only a matter of time before Baker and his gang members are capture by police.