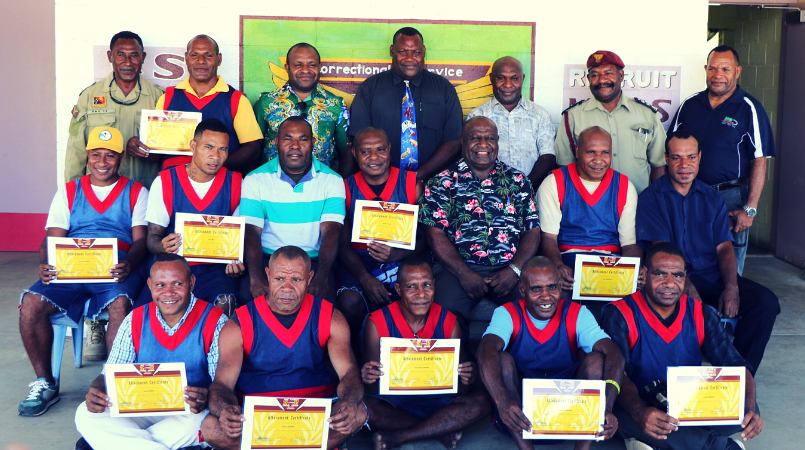 Ten inmates graduated on November 30th with Certificates in Catering after completing eight months of training from the CS Training College.

As part of the rehabilitation programs that CS provides for the detainees, such training programs provide an opportunity for them to learn certain practical skills that they can use to support themselves once they are released back into society.

The program was facilitated by Arau Investment and included basic catering training provided by a chef contracted by the private company to conduct the training.

Present during the issuing of the certificates was Acting Commanding Officer for Bomana Correctional Institution, Senior Inspector Dimon Gah, who said: “It is a privilege for outside organisations to come facilitate and give such programs to help the detainees in their rehabilitation process.

“It will help the detainees to go back into their communities with such skills and to gain some form of employment when released into society.”

Rehabilitation programs such as this have also helped to increase the number of detainees who were sent out on parole.

“As a result of the spiritual programs and programs such as this training program, we have released about 28 detainees on parole this year,” Insp Gah stated.

Arau Investment Managing Director, Peter Dominic, said: “With the certificates we give you from the training, we want to empower you so that when you go out, you can use these certificates as a reference to get a job in a restaurant or kai bar or food shop.”

Chef Benjamin Lawrence, who has been contracted by Arau Investments, has been conducting the catering training this year since January till August. Chef Lawrence elaborated on the skills that he imparted to the inmates during the training program.

“Through my experiences and qualifications, I have taught them how to manage the kitchen, time management, health and hygiene, basic cooking methods like stewing, grilling, baking, basic meat-cutting techniques.

“I’ve also taught them how to look after the kitchen, how to use kitchen tools and equipment for specific purposes, like how to use and operate stoves, dish washer machine, and the basic use of cleaning agents and detergents in the kitchen.

“They have learnt so much from the training program and with their certificates, they can now be able to find jobs once they leave this place. “I have learnt from them that it is more convenient to do hands-on practical training other than theory.”

A representative of the inmates spoke on behalf of the other inmates, expressing their gratitude towards the training.

“Such programs and trainings can help to rehabilitate us, and help us to fit into society again,” said the representative.

Apart from the ten inmates who had received the training certificates, there were two others who were also part of the program but were not present as they were released earlier on parole.