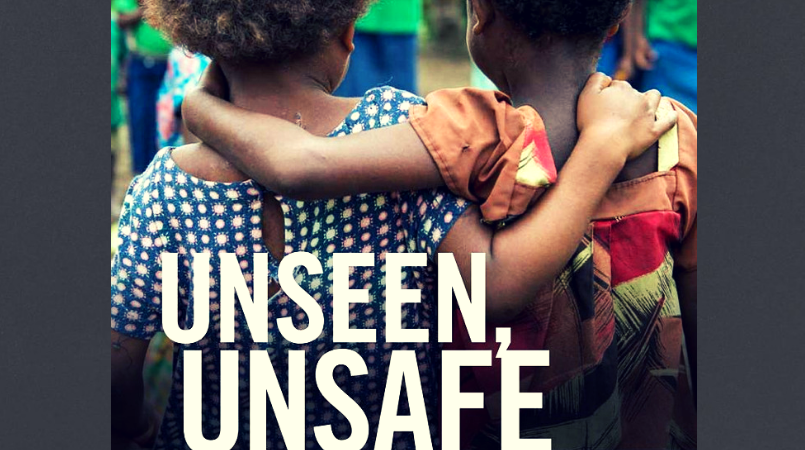 A landmark new report has detailed the shocking levels of physical, emotional and sexual violence, as well as neglect faced by children living in Papua New Guinea, the broader Pacific region and Timor-Leste.

Launched locally at a high-profile event in Port Moresby, the ‘Unseen and Unsafe: Underinvestment in Ending Violence Against Children in the Pacific and Timor-Leste’ report shows that over 70 percent or 4 million children across eight countries experience violent discipline at home, including 2.8 million (75 percent of the child population) in Papua New Guinea.

The report also reveals more than half of all sexual violence cases referred to medical clinics in Port Moresby and Tari were against children.

The research was conducted by Save the Children, World Vision, Plan International and ChildFund across fifteen countries in the Pacific, including Timor Leste.

Children who face violence and abuse often suffer from serious physical injuries, unwanted pregnancy, sexually transmitted infections and even death. The mental trauma they suffer can be just as devastating with violence leading to stunted brain development which affects their concentration, language development and ability to read and write.

Save the Children Pacific Regional Director Jennifer El-Sibai said while some progress is being made, we must invest more in what we know works.

“We welcome the progress already being made by the Papua New Guinean Government, including legislative developments, and the tireless work by churches, community organisations and other NGOs in addressing this critical issue.

“Building on this work through investing further in strategies that increase children’s resilience, and supporting positive parenting practices, is essential for the wellbeing of PNGs children, now and in the future,” El-Sibai said.

The report finds the levels of funding and policy measures to address this epidemic are inadequate. Just $1.1 million or 0.1 percent of all Australian foreign aid to the Pacific and Timor-Leste in 2017 was directed to programs specifically addressing violence against children. Only $3.4 million was spent in total by all foreign donors on this critical issue.

“We call on all international donors to the Pacific, and specifically Australia as the world’s largest aid donor to the Pacific, to work closely with national governments and to urgently increase targeted aid expenditure on ending violence against the Pacific’s children,” El-Sibai said.

“Every child deserves to feel safe at home, at school and in the community – ending violence against children is everyone’s responsibility,” Rogers said.

“However, if PNG is to make serious inroads to reducing the high incidence of violence against children, it is important that investments are made to socialise these new laws and provide essential training to those working at the frontline of child protection.

“This is where Australia can play an important role; by supporting those whose priority it is to build safer communities for children and equipping them with the tools needed to end violence,” Spence said.

"Anyone confronted by these figures would agree that this is just horrific. All children deserve to feel safe, to be healthy and loved. We cannot let these children down,” Legena said.