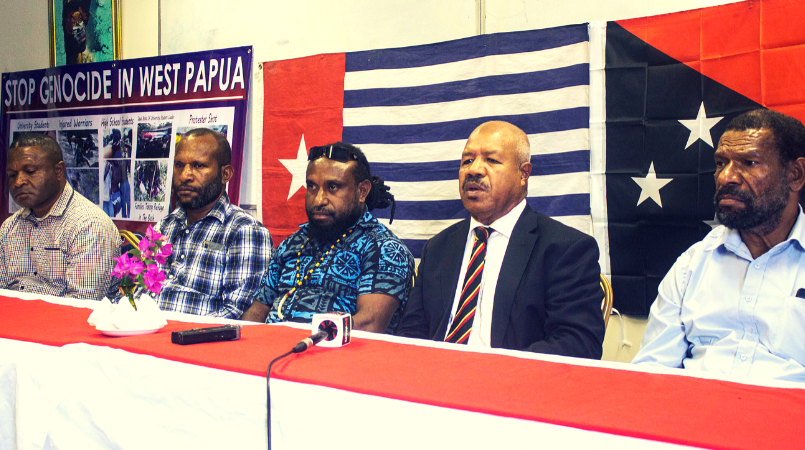 NCD Governor Powes Parkop is leading NGOs, PNG Council of Churches, students, disciplined forces and others in the city to petition the resident office of the United Nations Organisation on Friday at the Sir John Guise Stadium.

Speaking at a media conference on Wednesday (Oct 9), flanked by Noel Anjo of People’s Power Movement, Jeffrey Bomanak who is the Chairman of Free West Papua Movement or (OPM), Rex Buka of NCDC Youth Desk and James Yalya of NCD Governor’s Regional Office, Governor Parkop called on everyone in the city to declare this Friday as ‘stop work’ and show their solidarity to the fellow Melanesians suffering from the autocratic rule of Indonesia.

He also called on business houses and departmental heads to release their staff to express themselves freely to support this cause.

He said many local MPs have thrown their support against the gross abuse of human rights and genocide in the region during their conversations but have not spoken out against it due to the government’s foreign policy on West Papua.

Governor Parkop said fellow Governors of Northern, Eastern Highlands and East Sepik were absent today at the conference due to Parliament Session, adding he was assured that they would join him on Friday during the rally.

The event is being planned as the deadliest violence and prolonged protest for self-determination has tightened its grip over Papua and West Papua provinces of Indonesia where dozens have reportedly been killed while others injured.

He said in light of the tense situation in the region, the petition they would demand the UNO – via its country office – to immediately implement the recent Pacific Islands Forum’s resolution on West Papua for Indonesia to invite United Nation’s Commissioner for Human Rights, Michelle Bachelet, and her team for a trip and investigate the allegations of gross abuse on human rights and genocide, and hold those responsible accountable.

Parkop said more than 5,000 signatures have been collected already.

Parkop, a vocal human rights lawyer before becoming politician, said everyone in the country and across the Pacific Region should further support the right side of history to fix controversies sparked off by 1969 Act of Free Choice Vote, which only allowed 1,026 indigenous West Papuans out of over 1 million population to decide the fate of their political freedom.

He also called on Indonesian President Joko “Jokowi” Widodo and his people to understand that if he continues to use suppression, oppression and terror, they will continue to lose respect of not just the West Papuans but PNG and the Pacific as a whole.

He continued that the strategies used thus far by Indonesia has only exacerbated the problem and not contributing to the long-term solution.

“No matter what Indonesia does or says, it is not about developments or it is not about services, but it is about the dignity of our people and their freedom. They have never been treated equally like human beings,” he said.

In 1969, he said, their population was close to a million whilst PNG had 1.5 million, adding after 57 years, the latter has close to 10 million people whilst West Papua has less than 2 million.

Sharing similar sentiments, Anjo said if the government maintains its current foreign policy on West Papua, he is planning to tour the whole of PNG to increase awareness on West Papua issues to garner support, which can force the Government to change its policy.

Bomanak said PNG’s move to shift its foreign policy on West Papua will influence Indonesia to consider his people’s plight.