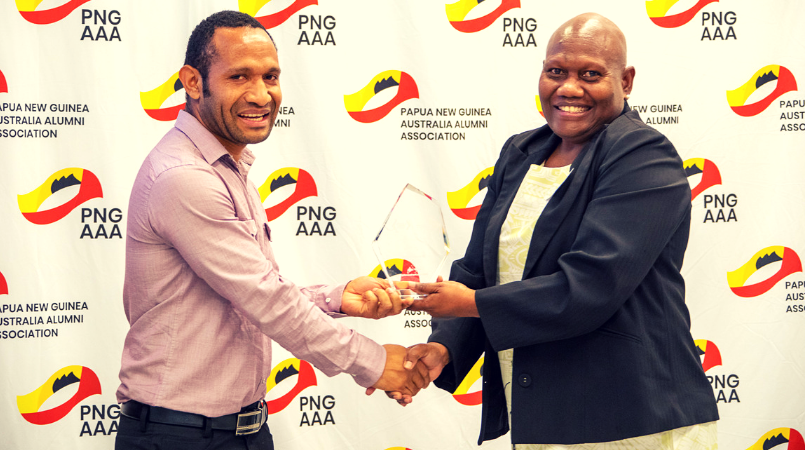 When it comes to championing health care and making a positive difference in regional Papua New Guinea, Dr Izzard Aglua’s credentials are impressive by any measure.

After graduating with a Master’s of Public Health from James Cook University, Queensland, in 2016, Dr Aglua initiated the set-up of a Clinical Research Centre at the Kundiawa General Hospital with the support of the Hospital board and administration.

Dr Aglua’s efforts were recognised recently when he won the PNG Australia Alumni Association’s 2018 Young Leader Award for his contribution to medical research in PNG.

Through the Clinical Research Center, Dr Aglua has also published two papers with international medical journals and has been invited to numerous medical conferences around the world to share research findings with doctors, researchers and health professionals.

His published papers were on stroke and osteomyelitis (bone infection) in children, which were recognised with a Young Researcher Award at the Asia Pacific Stroke Conference in China (2017) and the World Pediatric Congress in Dubai-UAE (2018) respectively, for research paper quality, novelty and significance.

The Clinical Research Centre has fostered research collaboration with Australian partners including academics and researchers from the College of Public Health, Medical and Veterinary Sciences and the Tropical Health and Medical Research at James Cook University, Doherty Research Institute, Federation University and the University of Sydney.

Dr Aglua is also a two-time winner of the Australia Awards Alumni Grants Scheme through which he presented his research findings in medical conferences in Athens, Greece, in 2018 and Amsterdam, the Netherlands, in 2019.

He has initiated a drive to promote medical research and publications by local doctors in Papua New Guinea which will contribute to informing and changing the medical practice in the country, region and world. His osteomyelitis study has identified a drug-resistant bacteria causing bone infection in children, as well as a new antibiotic regime to treat bone infection in Papua New Guinean children.

It seems fair to say that Dr Aglua’s recent PNGAAA Young Leader Award – while richly deserved – will not be the last accolade of this impressive pioneer’s career.