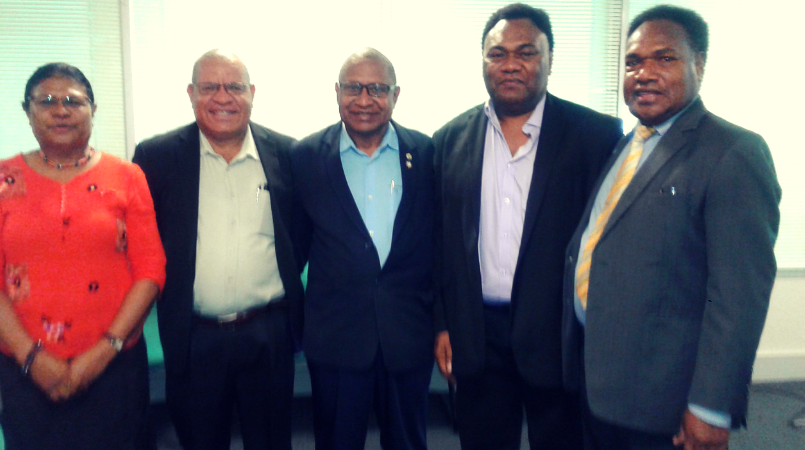 The National Department of Health will have new acting executive managers in two of its four divisions, starting off with the Public Health Division.

Dr Sibauk Bieb is being replaced by Dr Daoni Esorom who will be acting on the position for the next two to three months. Upon his appointment, he was the manager of Health Promotion and Education Branch.

At a handover-take-over ceremony on August 8th, Health Secretary Pascoe Kase thanked Dr Bieb for honourably accepting the decision to have him replaced without any hesitation.

Dr Bieb delivered a moving speech in which he acknowledged the decision of Kase as head of the department, saying the position belongs to the people of PNG and not his own.

He said he believes in submitting to authority and believed Dr Esorom would do a better a job than he did. Dr Bieb also prayed over Dr Esorom to ensure a smooth transition.

A year ago, Dr Esorom joined the department as the manager of the Health Promotion and Education Branch, but he is not new to the department.

Six years ago, he was the manager of Sexually Transmitted Infections and HIV/AIDS program within PHD for nine-and-a-half-years.

He said while out in the cold, he worked with a number of private organisations with Oilmin and did a lot of work and consultations for many companies, including ExxonMobil, Oil Search, Eagle Wood, Interoil, Talisman and Horizon. Dr Esorom is a medical doctor but also has qualifications in Anaesthesia, STI/HIV/AIDS Public Health, Management and leadership.

He set to work immediately after the hand-over ceremony. He said immediate on his plate is to work with the managers of the five branches of public health: disease control, family health services, central public health laboratory, environmental health and health promotion and education by identifying the needs in human resources, finance and assets.

He said when he joined Health Promotion Branch he was told by staff that they were not able to perform for about four years due to lack of funds, but under his leadership they were able to provide support to the Public Health Division, especially in the emergency response to polio.

Dr Bieb would not be let out in the cold, but to remain within the division in a new role and provide help to Dr Esorom.

He said the Government is saying “Take Back PNG and Make it the Richest Black Christian Nation”, so the Health Department needs to see how it can take back health.

“There are a lot of things we are losing already and how do we take those back in terms of our programs,” stated Kase.

He said when things in the department are not going well, the people do not criticise the program managers but the health secretary because he is the chief accountable officer. Similarly, when a program is not doing well, the supervisor gets the blame and not the subordinates. That is the bottom line to making changes.

“Why Dr Bieb is relinquishing the position that he is currently on for another role, it is because many of us have not done our jobs. But because he is the boss, he is now coping the blame. That is how it works,” he said.

“The reports are indicating that coverage rate has gone very low in the last six years that is why polio outbreak came. We didn’t protect the children of Papua New Guinea. Work was not done. That is what it means so I would want all of us to do our jobs going forward,” said Kase.

“Supervisors too, if people are not doing their jobs, talk to them. Supervisors and subordinates must communicate regularly on performance.”

Furthermore, he said management decisions were made to ensure the department is delivering its priorities and it was not for unions to come in and say ‘you cannot charge officers for non-performance’.

“Unions are set up for the welfare of their members. Staff administrative and management matters are for supervisors and subordinates for better management of an organisation and deliverance of our key priority indicators.