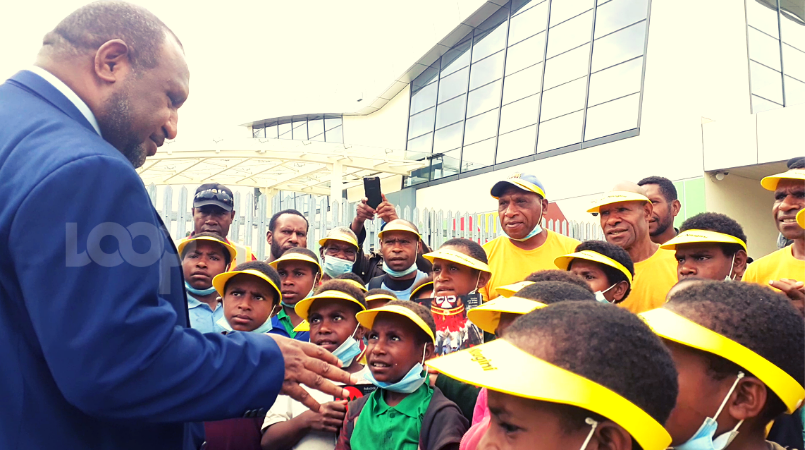 It was a chance encounter, but one the orphans and disadvantaged children of Bundi will never forget.

On the final leg of their two-day excursion this morning, they met with Prime Minister James Marape as well as boarded Air Niugini’s Fokker 70 at the Goroka Airport.

These 27 children, aged between 6 and 10, hail from one of the most remote areas of Madang Province.

They started their excursion on Tuesday (July 7th), walking for at least an hour from their transit home at Mondia Pass to Gembogl, Simbu, took a PMV to Kundiawa then travelled for four hours to Goroka, Eastern Highlands Province.

Their initial plan was to close the program off with a visit to the airport to watch Air Niugini’s Fokker 70 land and take off.

Air Niugini, however, extended an invite to the children to join their crew on the tarmac as well as get a first-hand experience of boarding the plane.

To further add spark to an already exciting day, Prime Minister James Marape, who was attending a launching by the Coffee Industry Corporation, had to board PX 160 due to issues with the Falcon jet.

The children had a front row view of the welcome delegation at the airport as Asaro Mudmen and a police parade added colour to the atmosphere.

After inspecting the Guard of Honour, the Prime Minister spared a few moments for the children where he stressed on the importance of education as well as made a commitment to assist in building them a classroom.

An overwhelmed Vincent Kumura of Kumura Foundation described the day as a pinnacle of their adventure.

“We’re super excited that they can get to see Air Niugini first up. And they’ve never been (exposed) to a city life or urban life before,” stated Kumura.

“It’s an unforgettable experience for these orphans from a remote part of Papua New Guinea.”

Kumura said the children come from all over Bundi, which is located between the border of Madang and Simbu Province, Jimi in Jiwaka Province and Eastern Highlands Province as well; areas where there are no basic health and education services.

The children live in a transit home built for them by the Kumura Foundation, so they can go to school in Simbu.

Most of them are orphans while some of them had their parents sign an agreement with the Kumura Foundation to assist them in getting an education.

Meantime, speaking on behalf of the PX 160/161 crew, first officer Patrick Kiromat said they were inspired by Vincent Kumura and his foundation members for their contributions to the community and especially the children.

“And for us to be a small part of their lives and their journey here, we’re humbled and we’re very proud,” stated Kiromat.

The children are now making their way back home.