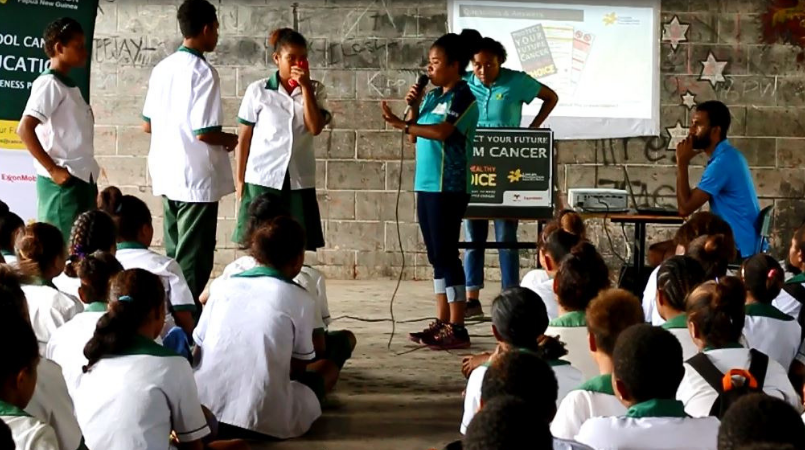 The program began in March with Hagara and Tatana primary schools and continued with Boera Primary School in the beginning of April.

The HTSP is a school-based cancer education and awareness program that focuses on empowering teenagers to make healthy lifestyle choices as a way to reduce their risk of getting cancer in the future. The program is conducted by PNGCF Health Educators and comprises of a workshop that educates on what cancer is and ways to reduce the risk of getting some types of cancer.

Each workshop was conducted by Health Educator Jacob Oburi and assisted by Loyla Mathew.

More than 450 enthusiastic students between the grades of six to eight participated in the HTS Program to learn about what they can do to protect themselves and their families from cancer.

Mathew, an active health educator with the PNGCF for over 2 years and has a background in biology from the University of Papua New Guinea, emphasised on the importance of making healthy choice today.

“Reducing your risk of cancer is as simple as making choices like do not drink alcohol, do not smoke and do not chew betelnut,” said Mathew.

“These are the main causes of most types of lifestyle diseases in PNG.”

She added on by stating that eating healthy and regular physical exercise helps to reduce this risk.

When asked about how successful the HTS Program has been so far, Priscillar Napoleon, Executive Manager of PNGCF, said: “A survey is also conducted during the program to gauge the knowledge of the students before and after the workshop. From the three HTS Programs conducted so far, 64 percent did not know that chewing betelnut, smoking and alcohol increased the risk of cancer in the future.

“The HTS Program encourages positive lifestyle choices to students before they are influenced by peer pressures.”

The message of making healthy lifestyle choices reached over 1,800 students through the HTS program in 2018 and will continue to see an increased reach in 2019 through the partnership with ExxonMobil PNG this year.

The HTS Program will continue throughout the remainder of the year to cover another five primary schools in the National Capital District (NCD) and Central Province in Baruni, Hanuabada village, Porebada, Papa and Lealea.

PNG Cancer Foundation Executive Manager, Napoleon, acknowledged the support and partnership of ExxonMobil PNG, Moore Printing and Liklik National in joining the fight against cancer in PNG and making the HTSP Cancer Education Program possible in 2019.