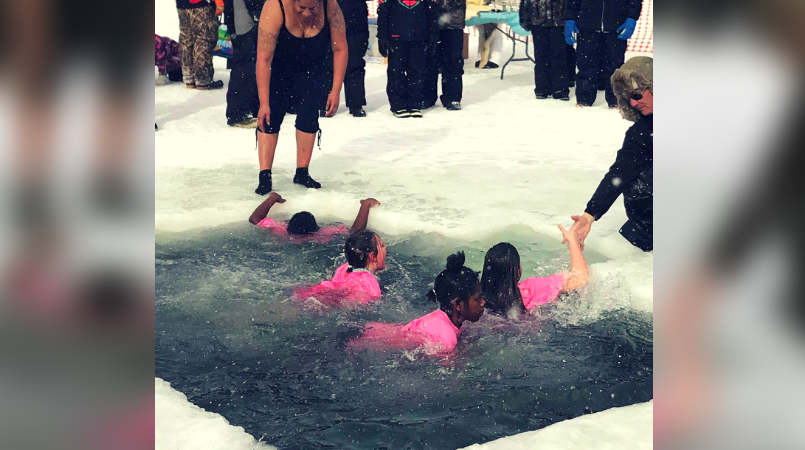 Under a light sprinkling of magical snow, PNG friends charged ahead, laughing and shrieking into the Polar Bear Dip at Lake Commando, as promised for the Hazel Hakalits Medical Appeal.

Rosinah, Indira Hannett, two of their classmates, and mum Symone Dawanincura did not mind the freezing -20C temperature and powdery snow.

The three Papua New Guineans and their Canadian connections wore their eye catching pink ‘For Hazel’ as if donning a coat of armor and together took a leap of faith into the freezing lake water to a huge burst of cheer.

Mum, Symone was the last to go in, spurred on by small but brave crowd in the wintry conditions.

With both the near frozen PNG and Canadian flags in the background, air temperatures challenged organisers and spectators alike.

“The girls were such an inspiration with the energy and heart that they have put into this unique fundraiser, so when it came to crunch time we were all psyched up and ready to go, no matter what,” Symone said later from the comfort of her home.

“Just the adrenalin brought on by the great encouragement we received from Pledgers back at home, in Samoa, Australia, and here in Cochrane, had us all in a positive frame of mind, knowing we were doing something good for a special young lady in Hazel Hakalits.”

Amidst the cheers and laughs the Polar Bear Dippers had to be in and out of the specially carved out Dip zone at Lake Commando in a flash, to keep the threat of hypothermia away, with a wind chill factor of -27C forcing the giggling girls to scurry for a nearby portable sauna put in place to thaw out those up to the challenge.

Special steps were carved out of the ice below water level to allow dippers an easy exit from the lake and paved the way for organisers to see through an incident 59th Cochrane Winter Festival.

When asked by a fellow Dippers why they did it, once inside the sauna, nine-year-old Katlyn, Rosinah’s Grade 4 classmate, told everyone: “We are supporting a very sick girl in Papua New Guinea and she needs all the help she can get.”

And according to one invigorated and empowered Rosinah Hannett: “This was so fun! I can't wait to do it again. Get well soon Hazel!”

Thankfully Symons's neighbours came to the rescue with hugs (and no doubt cups of hot chocolate later), for photographers, placards holders, flag bearers and videographers freezing with big smiles outside the sauna, all Hazel's Helpers - and all still on a warm fuzzy high for being part of the good-willed charity cause.